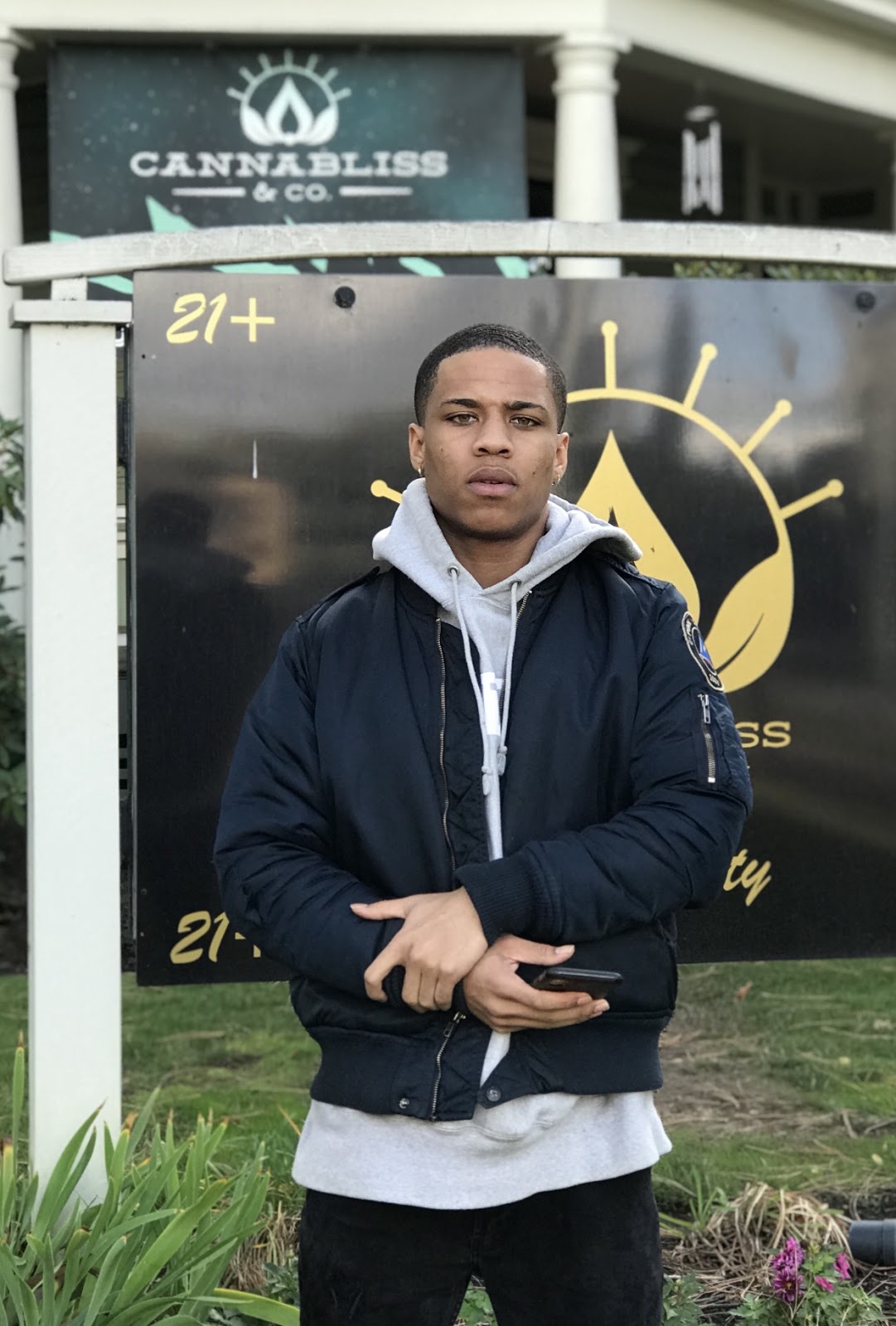 words and photos by Julio Jaquez.

Malik Patterson, a 21 year old San Bernardino native who came to Eugene to study at the University of Oregon, was a student and a budtender at Cannabliss and Co. It wasn’t until after high school that Patterson was first introduced to marijuana. As an athlete of the San Bernardino track and football team, using marijuana as a recreational substance never crossed his mind. Knowing that both of the sports he played required healthy lungs, Patterson wasn’t interested in slowing himself down.  “I didn’t really know I was that good.” explained Patterson, describing the skill on the field that came so easily to him.

Patterson stopped playing sports after high school, and figured that since he wasn’t playing, he would give recreational marijuana a chance. “It was great, that’s when I was like ok, I see what everyone is talking about,” Patterson said.

Patterson says that after he smoked for the first time, he understood why everyone was raving about marijuana. His first high was pleasant.  “It’s a stress reliever,” Patterson said, “and this high is something that I can control.”

Three weeks after this first high, Patterson experienced another first: a seizure on the mall escalator that ignited his interest in the medical benefits of marijuana. With no previous history of having seizures, Patterson was caught off guard. Still to this day, Patterson is grateful for help of bystanders and a medic who stabilized him and transported him to the hospital. After waking up from a seizure-induced blackout, Patterson woke up in a hospital bed.

While he was being diagnosed, Patterson realized that his urine was going to be tested. He knew THC would show up in his system and his mother would find out he had gotten high. So he confessed.  To his surprise, his mother simply replied, “You started smoking later than I did so I can’t be mad at you.” Patterson was diagnosed with epilepsy that day, and after that he and his mother began to research and inform themselves about his condition.

Patterson’s diagnosis inspired a new interest in medical marijuana. Patterson learned that marijuana contains cannabidiol (CBD), a substance in cannabis that can help control seizures in some people with epilepsy, and also reduce anxiety. In addition to using marijuana to help with his seizures and anxiety, Patterson also smokes marijuana to get high and take time to reflect on his life and the his expectations he has for himself.

Patterson’s s interest in the cannabis industry continued to blossom after moving to Eugene, OR. “It’s a whole different thing when it comes to the sale of marijuana here,” says Malik when comparing the difference of prices of marijuana in Eugene to his hometown, San Bernardino. “This is probably the cheapest place you’ll ever find weed in all of America,” Patterson said. With various dispensaries around Eugene offering relatively affordable $60 ounces, Patterson couldn’t really believe the cheap prices.

Not only did Patterson’s arrival to Eugene mean an  introduction to cheaper marijuana, it also brought a change in priority. Coming to the University of Oregon meant the acceptance of brand new responsibilities and a different way of life. As the pressures rose in college, Malik began to experience seizures more often than before. He realized that his seizures were connected to the increase of stress that came with school.

After working in the corporate world as secretary for roughly two years and feeling less than himself, Patterson decided to step in a different direction and join the ranks of the cannabis industry.  Now working for Cannabliss and Co. Patterson enjoys his new position. He works at the front desk, and he continues to develop his budtending skills. For Patterson, budtending is more than just taking flower, weighing it, and handing it to the customer. Patterson says the distribution and weighing process of budtending is one of the most precise things he’s done.With more and more experience, Patterson gradually continues to work more shifts behind the counter. As a consistent smoker and connoisseur of both CBD and THC heavy strains, Patterson is happy with where he is, and says that marijuana has helped him to take full control of his life.  Patterson now feels he is in a better place than when he first arrived to Eugene. His ability to handle the daily stressors that are thrown at him is stronger, and and continues to feel more like himself.