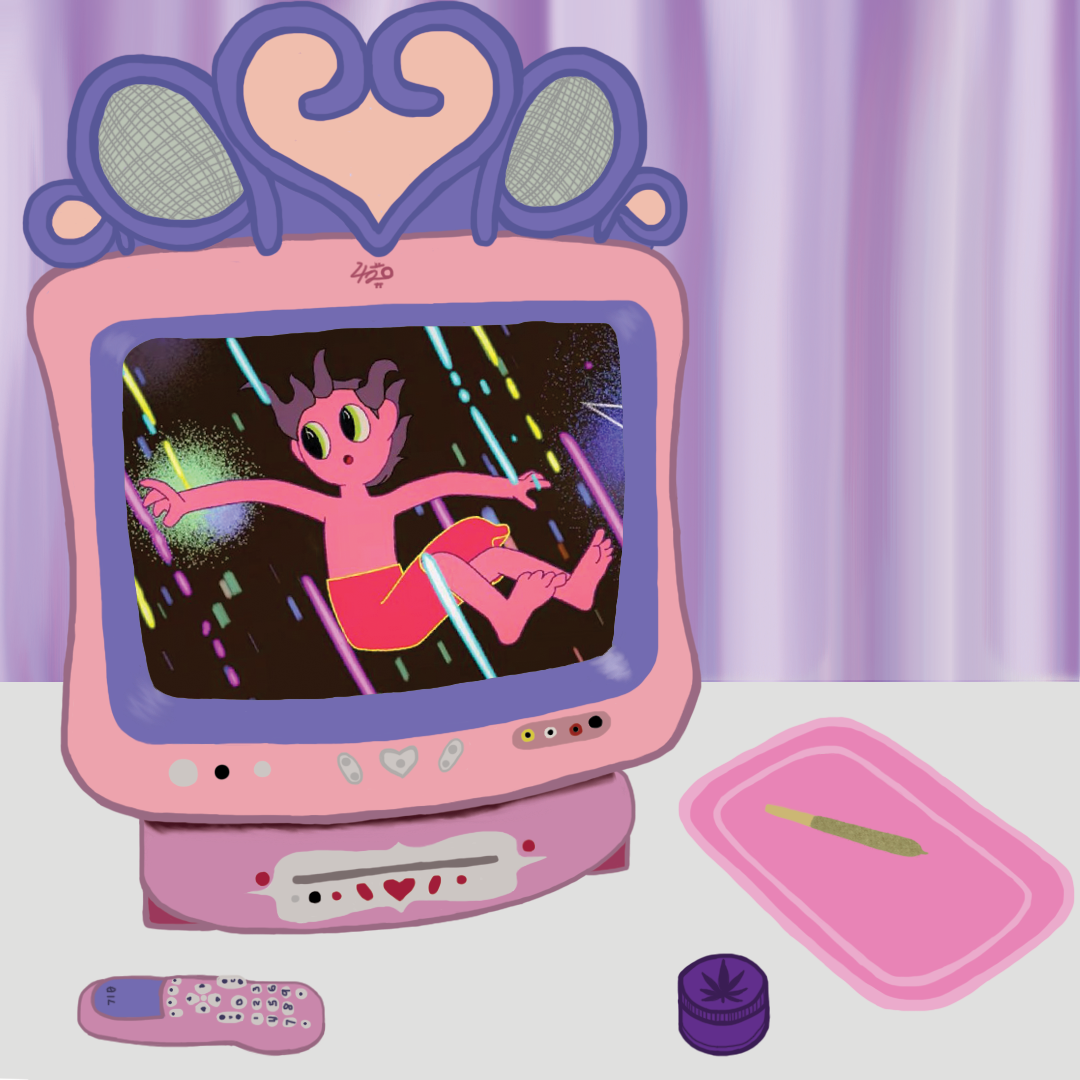 written and illustrated by Renee Thompson

For me, the relationship between weed and animation has always been clear.

Although it goes unspoken, it is apparently a familial tradition to smoke weed and watch cartoons. First, my grandfather watching Looney Tunes on Saturday mornings in the 60’s, and then there’s present-day me: smoking a bong in the wee hours of the morning watching Ranma ½. There is a certain wonder and magic about animation, about seeing art come to life. It exposes you to different perspectives, and perhaps because people don’t take it as seriously, there is more room to explore the world of cannabis. Animation is relaxing, beautiful, and more often than not, it’s funny. This stellar combination makes watching animation the perfect companion to a cozy night in with a joint (or three).

When cannabis is ingested, perception is altered in many possible ways. While every person reacts to cannabis differently, as well as having varied responses to various strains, most people do report heightened focus abilities and other changes in their senses. Spanish vision researchers at the University of Granada in 2021 found that cannabis use does affect vision, and the participants of the Effects of cannabis on visual function and self-perceived visual quality study reported seeing halos and other small visual distortions. As someone who watches animation both sober and high, I have noticed slight color, hue, and shade changes as well as small light halos which do slightly alter the works while being under the influence. For most cannabis consumers giddiness, hunger, and fatigue are common side effects to consumption that go well together with watching a funny cartoon and eating your favorite munchies.

After consuming animated works for some time, one begins to notice repeated symbols, metaphors, and other coded language that is used to bring cannabis into the audience’s mind. In adult animated T.V. series, like The Simpsons, Family Guy, American Dad, and South Park, references to cannabis, like South Park’s Towelie, are in-your-face even if they were produced when cannabis use was illegal in the U.S. Characters in these types of shows can be seen purchasing cannabis from dealers, consuming cannabis, and may even have a designated stoner character. In some cases, watching these types of shows were many people’s first encounter with cannabis related concepts and rituals. I feel that animation is also largely affected by the creatives that make them, and since cannabis has been known to alter creativity, it makes sense that artists who may use cannabis would slip in these references into the art they make. Even though animators like Adventure Time’s Pendleton Ward, Steven Universe’s Rebecca Sugar, and Gravity Fall’s Alex Hirsch have been speculated by fans as cannabis users, none of them have ever made any public comments about using cannabis.

Animation made after cannabis legalization in America, like Midnight Gospel, seem to be moving away from more joke-like cannabis use and focus on real conversations embedded in the dialogue. Midnight Gospel opens with cannabis activists being eaten by zombies as the main character, Clancy, interviews the President of the United States, played by Dr. Drew Pinsky, an addiction medicine specialist, about the pros and cons of drugs. Together, the characters have an in-depth conversation about sensations, experiences and research related to psychedelics. The animated fictitious tale combined with real interviews created a new type of story–telling that I had never seen before.

Animated films on the other hand, are not as cannabis-friendly as adult animated T.V. series. Most likely due to the fact that a majority are made for children. However, there are some exceptions. In the animated film Persepolis, a film based on the autobiographical comic The Complete Persepolis by Marjane Satrapi, Marjane recounts her use of cannabis as a way to forget about the troubles she left in war-torn Iran and connect with her new friends in Europe. In the film, which was made in France,  you see Marjane buying cannabis, consuming cannabis, and reflecting on her own use of the substance. Whether displayed as exaggerated use, as shown in shows like American Dad with the golden blunt, or a more realistic use as seen in Persepolis, adult animation is where you see the bulk of cannabis references and use.

As for non-adult animation, references are more hidden. In season 4 of Hey Arnold!, Arnold’s grandpa insists he cannot go back to school because he, “lost too many brain cells,” and insinuates Woodstock for being partially responsible. There are also more blatant references in shows like Bob’s Burgers, which is rated 13+, but also shows the Belcher children working on an illegal weed farm and selling weed to other characters. In the realm of advertising, the partially animated Expensify commercial featuring rapper 2 Chainz, which aired during Super Bowl LIII in 2019, shows a scene where the musician helps the reindeer he is riding smoke out of a bong. In that same Super Bowl, an Acreage commercial calling for medicinal cannabis legalization was blocked from airing.

There is something extremely nostalgic about cartoons, animated films, and anime that reminds me of simpler times. Even though the days of walking to Blockbuster video to get the latest Studio Ghibli movie are over, animation has never been more accessible. Today’s streaming services offer thousands of choices, and one could watch animated works for years without watching anything twice. Animation has always been a stage to talk about real life, as distorted as some of the creations are. This is also one of the few mediums that has been able to implement cannabis culture, possibly because of the artists behind the animated works and/or the audiences that consume them. I hypothesize that as cannabis consumption becomes more normalized, we will continue to see realistic, and perhaps less humorous, cannabis use in animation.

For those that are looking for some recommendations, here are some of my favorite animated T.V. shows and movies not yet mentioned in this article. Most of these titles are available on streaming services like Netflix, Hulu, Amazon, or HBO Max, but you could also find some of these works at your local library.

*Related to cannabis, or has cannabis references.