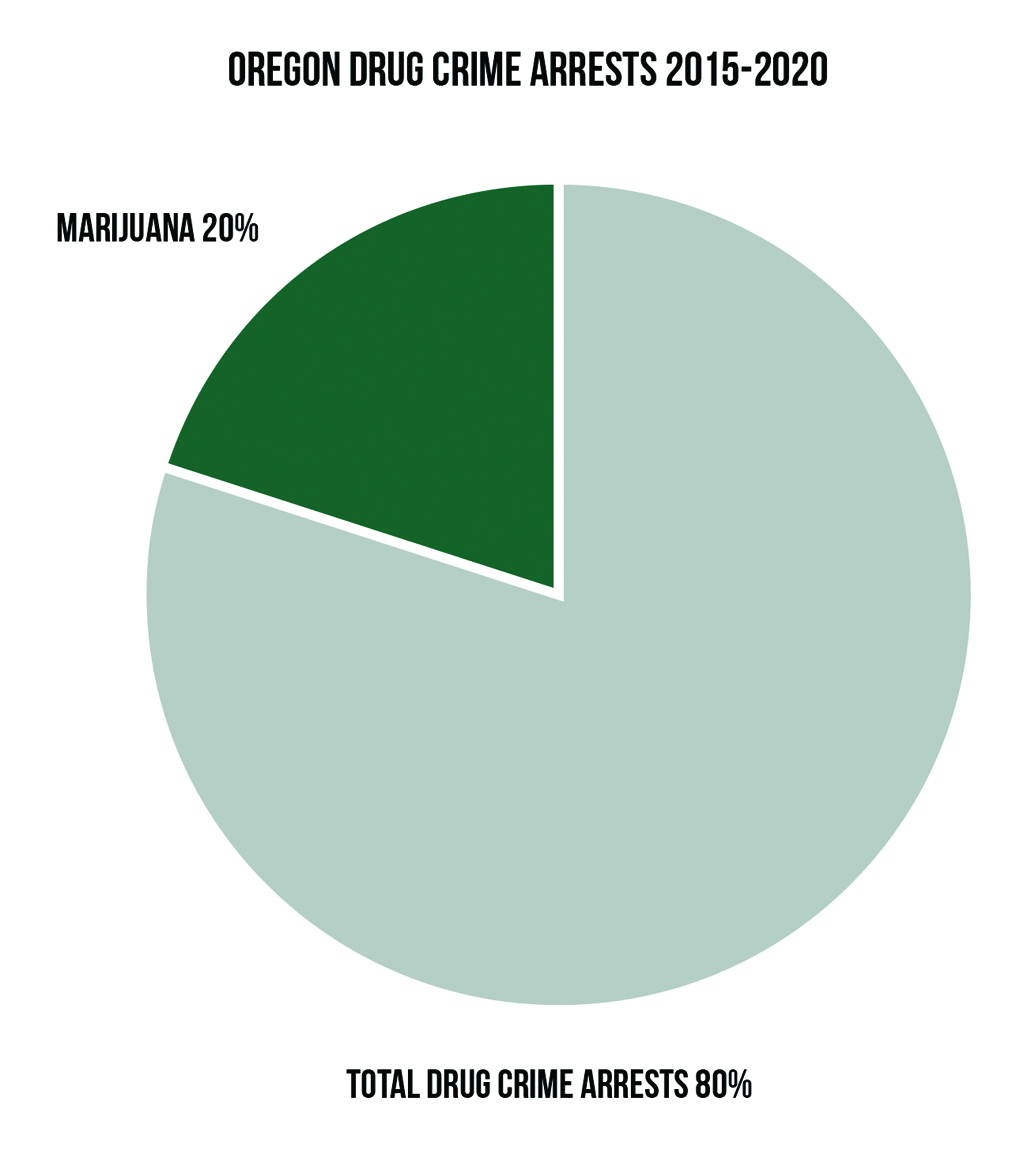 Oregon’s incarceration data provides insight into the progress and problems with the state’s drug policies and legislation. In 1973 Oregon became the first state to decriminalize the possession of cannabis, displaying progressive attitudes about drug consumption among voters and politicians. By looking at the state of Oregon’s own Department of Corrections (DOC) data, we can begin to see how the rate of arrest and incarceration for crimes related to federally controlled substances has evolved. While Oregon is making progress in decreasing these numbers, many southern counties are facing a myriad of challenges with illegal cannabis operations, which could lead to the possible increase of arrests as the pandemic continues.

Across Oregon, arrest and incarceration disparities show inequities in the criminal justice apparatus for people of color. Looking at data from 2018, law enforcement would need a reduction of 351 arrests and 21 felony convictions for Black Oregonians to match the same rate for white individuals. This metric, raw differential representation (RDR), is used in the analysis of bias in criminal justice system across the country. In 2015, the rate of felony possession arrests was 150 arrests higher for Black Oregonians than white ones. These disparities convey that progress for drug arrests and convictions are most often beneficial only for white individuals and the predominant burden of these policies falls on historically marginalized groups.

THE LAWS THAT HAVE CHANGED THE DATA

For example, in 2019 the State Senate passed Senate Bill 420 which “establishes procedures for persons with qualifying marijuana convictions to file motion requesting court to enter order setting aside conviction,” according to the Oregon Legislature’s website. This allows for those with prior cannabis related convictions to have these expunged from their records if the conviction would no longer stand under current Oregon law. This can be helpful for those seeking to apply for mortgages, find employment, or any other area where formerly incarcerated individuals find a burden of prejudice.

The Oregon Criminal Justice Commission has also updated their Possession of Controlled Substances report to track the changes that House Bill 2355 has had on the drug trend data in the state. This law reclassified the crime of possession of a controlled substance (PCS) from a Class B or C felony to a Class A misdemeanor. This changed the maximum sentencing for these crimes from ten years and a $250,000 fine to one year and a $6250 fine. HB 2355 took effect in 2017 and decreased the number of felony drug convictions by 61%.

CANNABIS ARRESTS BY THE NUMBERS

In 2020, arrests for the sale of cannabis were down by 23% and arrests for the possession were down 34%. These are trends that show how law enforcement is deprioritizing cannabis as a controlled substance when it comes to pursuing drug related crimes. However, between 2015 and 2020, these statistics have been inconsistent, and we can see from the FBI’s Uniform Crime Report (UCR) that arrests for cannabis sales have actually increased by 3%.

Oregon’s UCR data also portrays a downward trend for both drug related arrests and convictions using their dashboard on the Criminal Justice Commission’s website. This data does include all PCS related crime so it’s important to account for the small proportion that cannabis crime makes up of that total. The swap between a predominant number of misdemeanors and felonies occurs over 2017, the same year that HB 2355 took place, which demonstrates the importance of changing the law for sentencing.

To better understand the state’s given data, there’s a benefit in analyzing what percentage of total drug crimes cannabis possession and sales make up. In 2015, cannabis crime made up 37% of arrests, while six years later in 2020 that percentage had decreased by 9%, leaving cannabis crime only a quarter of the total arrests.

DRUG INCARCERATIONS IN LANE CO. AND BEYOND

In Lane County in 2021, there are currently 24 total individuals incarcerated for drug crimes, 16 of which are currently out on probation. These numbers have been dropping steadily since 2015 and show how the implementation of decriminalization laws of both cannabis and other narcotic drugs has led to a decrease in incarcerations. For statewide drug incarcerations this decrease is far less steep, between 2016 and 2019, the number of incarcerations hovered around 1070 and didn’t decrease significantly until 2020 with the pandemic leading to higher rates of probation and less incarcerations. This could be because of the decriminalization of street drugs in 2019 or due to an increase in releases because of COVID dangers. 2021 saw the largest decrease in all drug count incarcerations with a change from 440 first drug sentences in 2019 to 282 in 2020 to only 219 in 2021.

These trends, decreasing arrests and lower incarcerations rates, show Oregon’s steps forward to prioritize other forms of resources for drug related crimes instead of a reliance on the criminal justice system. Yet, with $25 million in federal funding currently backing southern Oregon’s pursuit of illegal cannabis growers, we could see an increase in arrests and incarcerations in 2022.

Green Eugene gathered incarceration and arrests data using the Oregon state Commission for Criminal Justice statistical dashboard and the FBI’s Uniform Crime Reporting database. Much of the raw data was unavailable for public analysis but information from UCR was independently analyzed by the author. The visuals that come from the CCJ dashboards are attributed and can be found here. Both Oregon’s and the FBI’s data report through the National Incident-Based Reporting System (NIBRS) which collects crime data that is independently reported to the agencies. In 2020, the FBI received NIBRS data from 175 of 234 law enforcement agencies in the state.

One thought on “Understanding Oregon’s Cannabis Arrest and Incarceration Data”