It’s the middle of winter. The sky is gray and the roads are mucked with mud and trash. An unknown residue is lining the sides of your favorite pair of rain boots and it almost seems like a sign to stay in, snuggle up, and share a bowl and some stories with friends. Well let me give you a tale that you can add to your roster…

Ever heard of the legendary “Godfather of Grass” and his classic hybrid strain “Kentucky Bluegrass?”

Johnny Boone, otherwise known as the Godfather of Grass, is a legendary figure in the weed smuggling world. As a once-been leader of the “Cornbread Mafia,” a rural Kentucky-based drug organization that grew 29 large illicit cannabis farms in 10 states, Boone obtained an intense following and was looked up to by many. After a mass arrest of the mafia in June of 1989 with over 70 arrests and 47 tons of confiscated cannabis from the site, the U.S. attorney in Louisville coined the Cornbread Mafia as the “largest domestic marijuana syndicate in American history.”

After the arrests of the Cornbread Mafia, Boone included, law enforcements believed this to have a positive impact on the community. However, after Boone was released and then arrested once more in 2017, the Godfather of Grass began to publicly defend the Cornbread Mafia and his crewmates.

“We’re from a poor place. … I don’t think anybody here is into any kind of thievery. I can only say that … in our area, marijuana is one of the things that helps put bread on the table for people,” he told the judge, according to the Washington Post. “We’re not criminals, we’re not. We’re not the kind of people who go out and harm people.”

The truth was that the local communities thrived off of the Cornbread Mafia’s business. Stationed in rural, small towns, there weren’t many job opportunities. The cannabis industry became a livelihood for many locals. After the organization’s bust in 1989, neighboring towns became impoverished. Local enforcement didn’t know what to make of this endeavor.

This has left Johnny Boone to be seen through two different perspectives: an infamous kingpin who ran the largest cannabis drug-ring in American history, or an individual whose cannabis business created commercial growth in local communities.

Boone’s story and the strain within it became so popular High Times magazine dubbed it as “Kentucky Bluegrass.” It is an evenly-balanced hybrid strain crossed between Blueberry and Huckleberry Kush.

With this cross, notes of sweet berries can be found while smoking it, all to be rounded out by a soft lemongrass aftertaste. Although a hybrid, it is an excellent strain to use to relax and is even made popular by medical users to relieve pain and physical stress. You can nearly feel yourself transporting to a rural Kentucky farmland, surrounded by warm sun and nature’s silence.

words and photos by Bryan Dorn

As 4/20 approaches, stoners everywhere are gearing up to celebrate the cannabis holiday. However, it’s important to pace yourself and choose your strains wisely in order to avoid a 5 p.m. bedtime or an immobilizing food coma. This list contains perfect strains for morning, noon and night to keep you stoned all day!

Start a pot of coffee and warm up your waffle iron, this potent sativa from White Label Farms clocks in at 24.3% THC and will leave you feeling uplifted after that 4/20 wake and bake. Chocolope (pictured above) has a distinct citrus smell with earthy undertones that give this invigorating sativa a very smooth and palatable taste. Shortly after consumption, users can expect to feel euphoric, uplifted and inspired. Conversations will flow and giggles will be had as chocolope makes its way around the circle. Tidying up the house and preparing for the day ahead will come easy with this strain. Don’t worry about a crash, this sativa can be enjoyed all morning with a gentle and slow comedown.

As morning turns to afternoon, pull out this heavy hitting hybrid to keep the party going, but be careful; this strain is sure to send you to the pantry. Testing in at 30.6% THC, this batch of Wedding Cake from Resin Ranchers gives off a pungent sweet-yet-skunky smell. The distinct vanilla aroma is sure to clear out a room and leave only the stoners behind. Descendant of Girl Scout Cookies and Cherry Pie OG, this hybrid is reminiscent of its predecessors, giving off that distinct cookie smell with heavy trichome production. This strain is sure to keep you stoned until bedtime and should certainly be reserved for the later afternoon.

For those that can manage to stay awake through the festivities, this strain stands at the end of the day to help cannabis consumers melt into bed and sleep off the day’s celebrations. Jelly Punch— an indica strain grown by PDX Organics testing at 26.4% THC— has a floral and earthy flavor. The purple and orange buds glisten with trichomes accompanied by the odor of raspberry jelly. This strain’s name could not be more fitting because it certainly smells of jelly and definitely packs a punch. Put on your PJs and turn on a movie, this strain is sure to bring your 4/20 to a blissful and peaceful end.

Sticking to the right strain at the right time of day can help consumers make it through the day without getting hit by the heavy slump and munchies coma that cannabis use may cause. Knowing about how different strains affect your body can also help you decide when and where is appropriate to use your cannabis. The effects described above are the opinions of the writer and consumers are encouraged to find what strains work for them and what growers they can rely on to produce quality products. Remember to consume responsibly on 4/20 and to not bogart the funions. All cannabis pictured is from Next Level Wellness on Willamette Street.

A cross between Hindu Kush and Purple Afghani, two infamous strains that hail from the mountainous ranges that divide Afghanistan and Pakistan, emerged the beauty we know as Purple Hindu Kush. Nearly identical to its parental lineage, Purple Hindu Kush provides a sense of relaxation that rids the body of any stressors in the mind. The dense, spongy and frosted flower is glittered with trichomes and it’s orange pistils are accentuated by the lavender color that is spread throughout the bud. Reminiscent of an Oregon winery, its sour pungent aroma is paired perfectly with an earthy-like taste or rich flavors, like dark chocolate.

Recognized and well-known, the specific variety that is Kush is often associated with its roots and reputation for a heavy kick. The origins of Kush cannabis produce a kind of high that is distinct and powerful. Strains intermingled with Kush are known for their potency and play a big role in the well known “couch lock effect”. Labeled a Top 10 Kush by High Times in 2016, Purple Hindu Kush is sure to relax you beyond belief. Be prepared to be soothed and lulled into a sweet state of calm. If you tend to be anxious, this strain will help you to wave goodbye to all of your worries. With the potential to derail an entire day,  Purple Hindu Kush earns our “Strain of the Month” recognition for March.

In 2009, Republican Congressman Mark Kirk of Illinois noticed the zombie-like effects it had and proposed a bill to increase criminal penalties when referencing to the infamous Kush strain — a testament to how intense it’s effects can be. Although it (probably) won’t turn you into a zombie, Purple Hindu Kush is not a strain to mess around with if something needs to be accomplished. This indica is destined to be paired with finally arriving home after a long day, unwinding and unstrapping those anxiety-induced bootstraps. So go home, find the best spot to sink in on the couch, and light up with this relaxation station: Purple Hindu Kush. 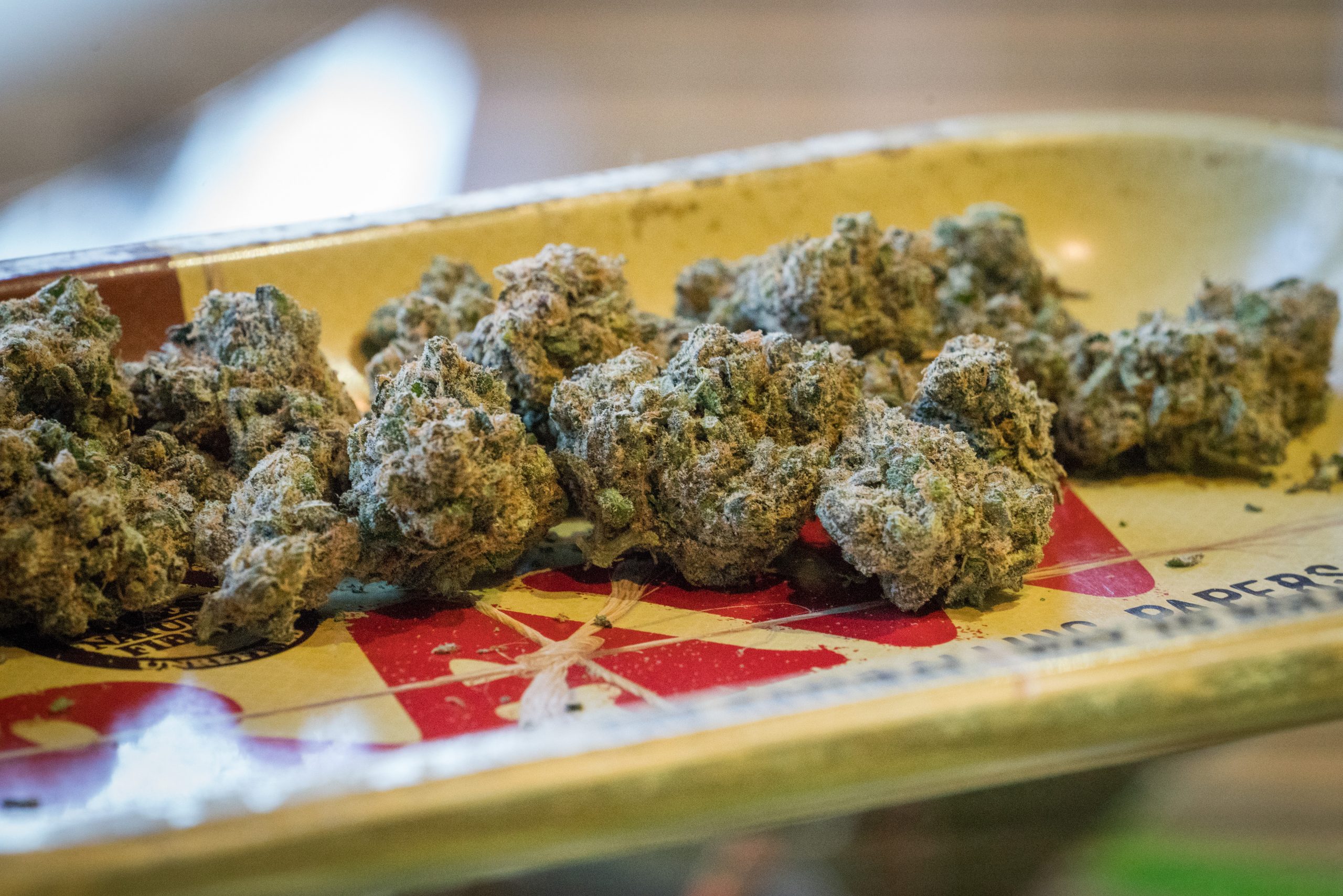 From the first sniff of the jar, the musky aroma lets you know that this strain isn’t here to mess around — or is it? Sour Patch Kids is a dense, all around uplifting strain that is destined to make you feel the intense waves of a euphoric high. This sativa-dominant strain allows you to feel every moment at its peak, while also being completely relaxed and content. Whether it be a night out on the town or a calm Sunday, Sour Patch Kids is the perfect strain to either let go and breathe or check some things off of your to-do list.

The light green buds with subtle purple hues that mark Sour Patch Kids (also known as SPK) earns Green Eugene’s “Strain of the Month” for November. When you first lay your nostrils on the powerful pungent aroma of SPK, you notice the sweet-candy-like smell the flower emanates, making it hard to resist for sweet tooths. Initially, the 60/40 sativa blend sparks up an intense, euphoric feeling, and then slowly guides you into a space of focus where you can accomplish anything you set your mind to.

Want to go to the gym? Want to write an article about the Strain of the Month? SPK allows you to concentrate while feeling those relaxing waves that sativa blends seduces you with. Budtenders eagerly reccomended SPK as a new-age strain that is certain to entice and entertain. With a texture like gooey crystals, the hairy lime green buds crumbled into the paper joint patiently waiting to be rolled tightly. Don’t have a grinder? Not a problem with Sour Patch Kids. After rolling a solid joint with the kind of treatment a beautiful SPK nug deserves, the strain is sure to deliver a head high that coats your mind and soothes your conscious. With an earthy flavor, the smooth hits pass seamlessly like clouds on the breeze. Within the matter of a few minutes, the intense, captivating high dissipates into thin air, converting the ambiance in the room into a space of zen and concentration.

Sour Patch Kids’ overwhelms the mind and body with relaxing symptoms that captivate you after a few puffs, but within a matter of moments any task seems feasible. Matched with a good to-do list and a hot cup of coffee on the weekend, finals week will be a breeze. 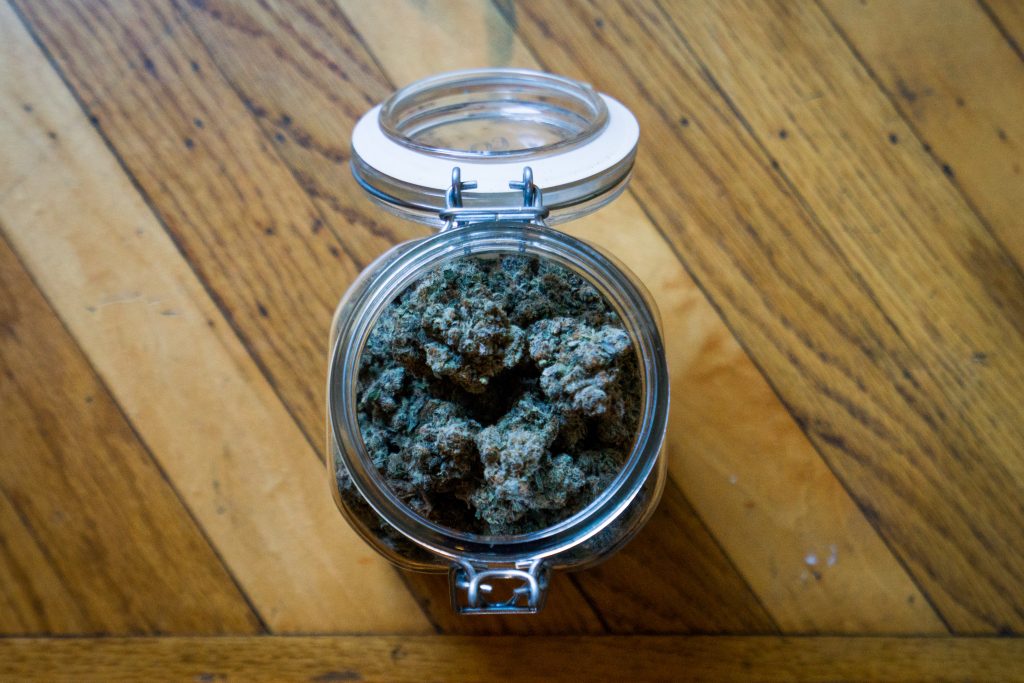