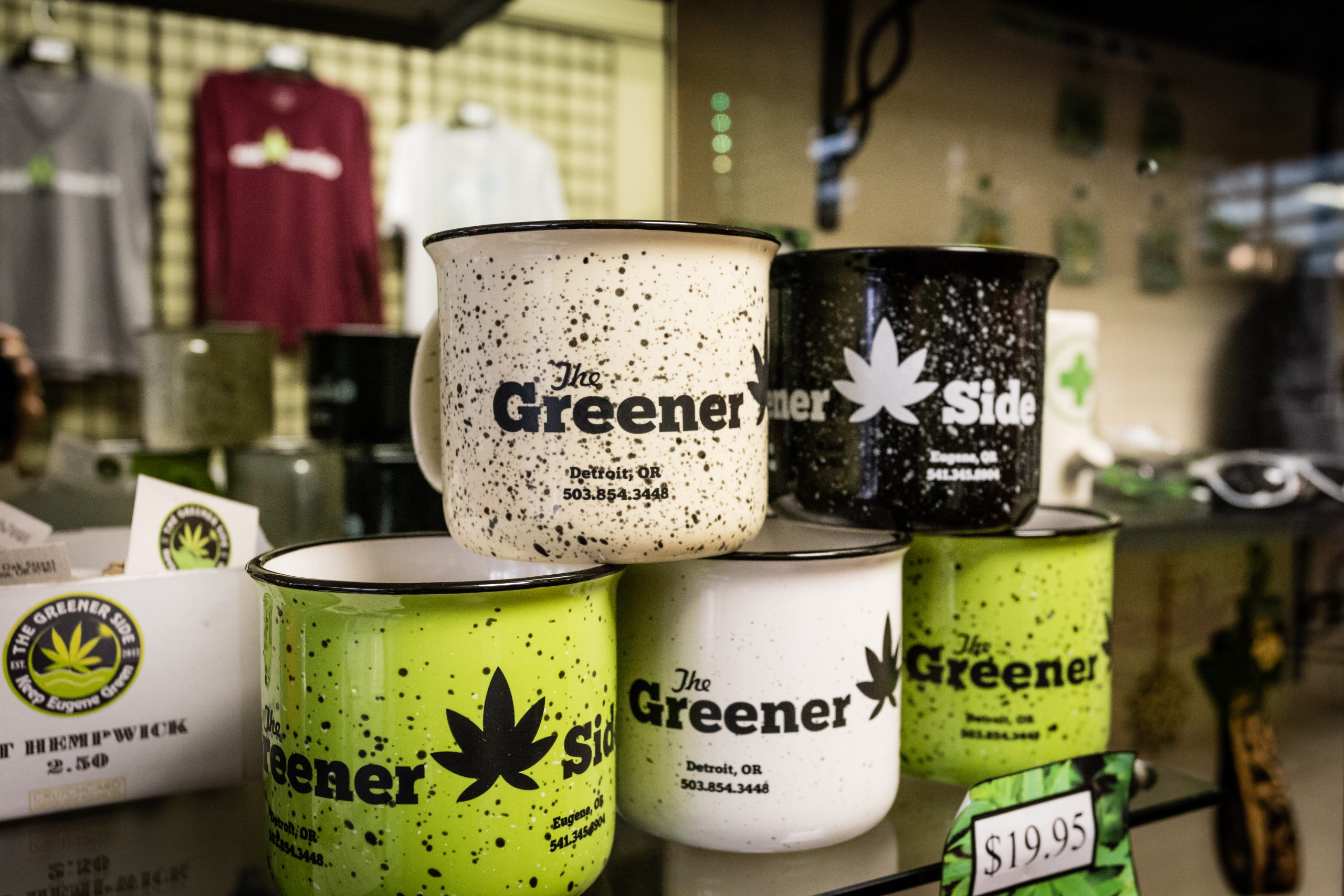 When Joe Hopkins moved to Eugene in 2012, Tracktown USA wasn’t his first choice. His family was more drawn to the city of Bend – the snow offered in that part of the state was particularly enticing. However, what ultimately made Eugene the place to go was a different kind of market – the marijuana dispensary market.

Hopkins and his wife, Chelsea, saw a need in the city for a quality provider of cannabis products. That’s why they started The Greener Side, the dispensary that they continue to own and operate. When they started their business, the state legislation hadn’t yet legalized the sale of recreational marijuana. Because of this, The Greener Side started out as a strictly medical dispensary. With this license to sell, the dispensary was welcomed by the cannabis-friendly communities of the city. It’s been on the strength of that community that the business has continued to thrive, making it the longest-running dispensary in Eugene.

However, it hasn’t always been smooth sailing for Eugene’s senior cannabis supplier. On May 23, 2013, only months after opening, The Greener Side was subject to a government raid. Although they were authorized to sell marijuana to medical patients by state law, federal law had the jurisdiction to intervene. What began as just another day in the cannabis industry saw the arrival of police, who arrested the entire staff. According to Hopkins, his personal home was also raided, private phones were confiscated and the bank accounts of the business were promptly closed. Hopkins’ wife was released that day, and they reopened their business within the next 24 hours. Though the business itself fought to overcome this obstacle, Hopkins said, “support from the community helped us keep going and kept our fire fueled.”

The legislation passed by Measure 91 to legalize the sale of recreational marijuana in 2015 brought relief to the fear of further raids occurring. “We’re extremely happy to be working in the legal market,” Hopkins said. When the new legislation took effect, The Greener side began selling their products recreationally. Soon after, Hopkins saw the customer demographics patronizing his store start to change. 21-year-olds started to come in on their birthdays for their first stop of many. Senior citizens, intrigued by the new market, began purchasing more and more cannabis product, finding it to be an effective medication for many ailments. Hopkins even met a woman who could recall a time before marijuana prohibition, when she had the same freedom to buy that she does now.

Hopkins has seen the normalization of marijuana as a necessary step for the industry since before the days of The Greener Side. Starting out, he decided to change the negative stigma that many people have associated with weed through the actions of his business. Since 2013, The Greener Side has hosted an annual charity golf tournament. This event has raised over $10,000 in the past four years, with the proceeds going toward multiple sclerosis.

As a member of Eugene’s Chamber of Commerce and the International Rotary Club, Hopkins has put his foot in the door of local business to make one thing clear: dispensaries are a credible business model. “It’s pretty awesome that I can go to any Rotary Club meeting in the world now, and I’ll be there for cannabis,” he said. “I can talk about my cannabis openly and proudly now.”

Being the oldest marijuana dispensary in Eugene and Springfield means that The Greener Side has persevered while seeing competitors come and go. While he welcomes the competition, Hopkins recognizes why many of them don’t last, attributing the ongoing success of his business to its commitment to customer integrity. “Changes to the industry don’t affect our protocol,” Hopkins said. Putting the customer first and staying consistent with the quality of the products they offer has earned the business a more loyal following than newer dispensaries that simply follow the latest trends.

Part of the customer loyalty that The Greener Side offers is daily deals that make marijuana consumption more affordable.  “Presumptions are left at the door,” Hopkins said. “When people come in here, they’re all coming in for the same thing. That’s something to better their life.” There are plenty of deals at The Greener Side to help improve customers’ lives. Mondays bring 15 percent off all edible products, and Tuesdays offer 10 percent off any purchase of $40 or over. On Wednesdays, customers can get $5 off the price of The Greener Side’s top-tier strains. Thursdays offer 15 percent off all products based in CBD, the cannabinoid with relaxing effects, and Fridays bring 20 percent off the purchase of seeds. Additionally, The Greener Side has a free membership program that customers can use to get further discounts and win periodically offered prizes.

Ultimately, the successful business Hopkins has built is only the beginning of the company’s potential. On Nov. 10, The Greener Side opened a new location in Detroit Lake, Oregon. Hopkins hopes to next franchise out into the greater Eugene and Springfield area. With an emphasis on customer loyalty, commitment to superior quality and a business model that has proven longevity, the future of The Greener Side looks bright.