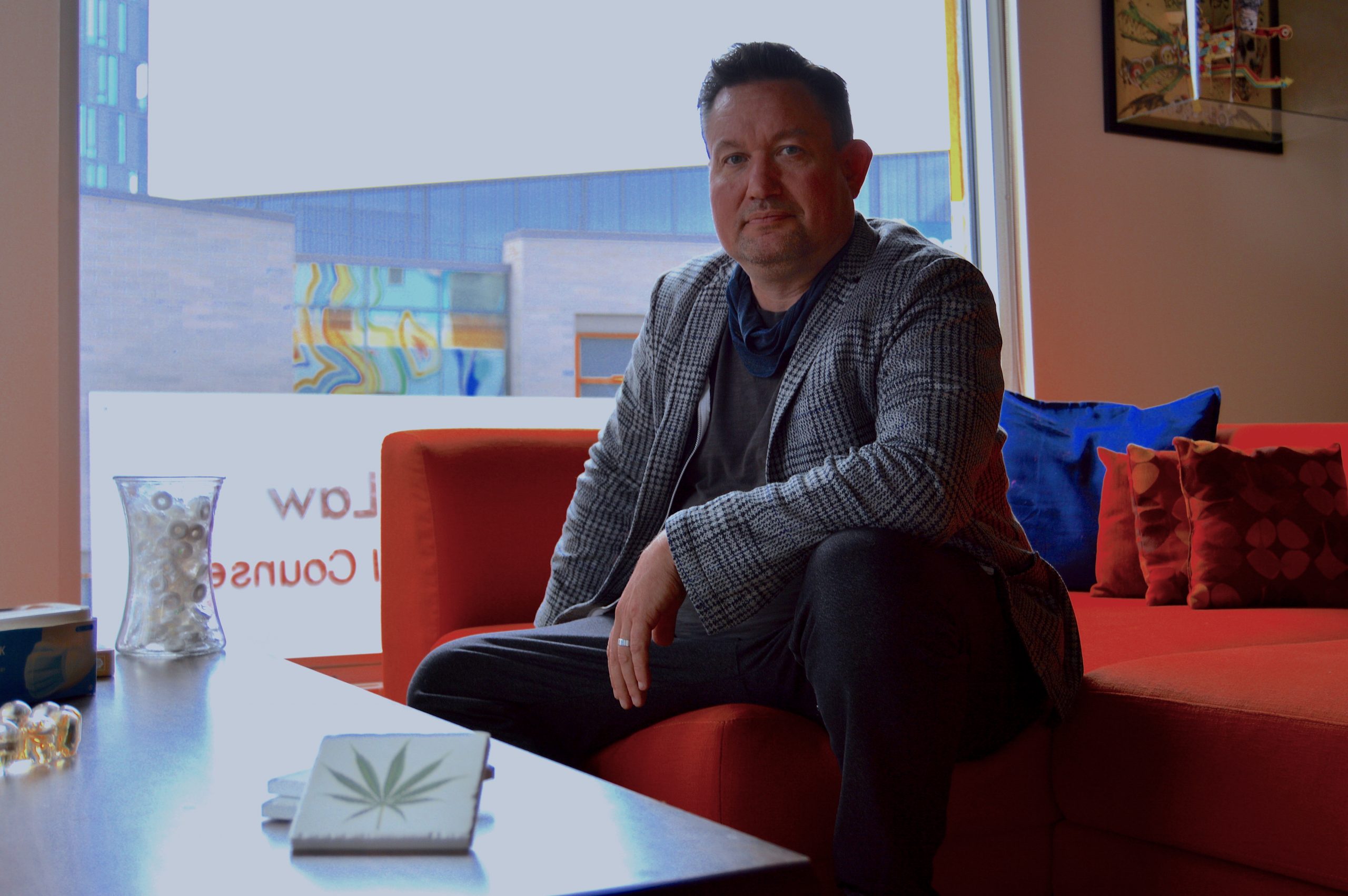 Written and photographed by Megan McEntee

Aaron Pelley made his name as a cannabis lawyer in the early 2000s. He not only won a large case, but made the argument that his client deserved to get his cannabis back.

“That made them the first police station slash dispensary in the United States,” said Pelley jokingly. His passion for this standard of justice inspired Pelley to create what is now known as Cultiva Law.

Cultiva Law is a firm dedicated to the cannabis industry: dealing with legal, business and compliance related cases all around the west coast. Chris Girard, paralegal and strategic operations at Cultiva, describes the firm’s ultimate goal as “the furtherance of policy and the plant.” I had the opportunity to sit down with Girard and Pelley, founder and CEO, to speak about cannabis law and the industry, as well as issues that arise within the livelihood of a lawyer in this field.

Pelley started out as a criminal defense lawyer dealing with domestic violence and sex offense cases. After a few months, he realized that he didn’t want to represent sex offenders and domestic abusers.

This was back in the early 2000s, when there were only one or two “pot” lawyers, as they were called by the general public, in each state. Once medical cannabis started rising in popularity, he began handling the corporate side of the budding industry.

“I knew I wasn’t smart enough to host an entire corporate law firm,” said Pelley. “So I started hiring other lawyers to handle the transactional side of this.” Enter Cultiva Law.

Cultiva thrives on its connection to the culture of the industry. Dependent on building the trust of clientele in this field, cannabis lawyers need to be well versed with both industry knowledge and an understanding of the client on a personal level. Pelley takes this aspect of the job very seriously, articulating that a relational understanding is just as important as a legal understanding of cannabis.

“I have to be the person that they trust,” Pelley said. “These other lawyers aren’t as good if they don’t understand the culture. They don’t understand the people… and frankly, they just don’t understand the outlaw mentality.” Pelley works with a variety of clients who are trying to navigate the newly legalized industry. Many of these clients have complicated criminal histories. Pelley recognises this, stating “these guys were former outlaws, and yeah, they need to be reformed. But they come from a different place.”

The stigma surrounding cannabis and other drugs creates this social divide, as well as the recency of decriminalization in Oregon creating a new realm of legal uncertainty. Cultiva takes measures to make sure these people feel safe in the wake of a stressful situation with the law. Whether it’s the rocket-shaped paraphernalia in the lobby of the office, the psychedelic band posters on the walls, or the laid-back demeanor of the staff, Cultiva designs every part of the experience to make clients feel safe and seen.

Misconceptions about cannabis use, both medicinal and recreational, plague the justice system. Pelley has helped countless medical patients with legal issues. “They’re using the drug to become functional. And people that are using cannabis recreationally are functional, and they’re using it to become impaired,” said Pelley.

Let’s say someone uses medicinal cannabis to treat their epilepsy, and they get pulled over; Pelley introduced this hypothetical with a fresh perspective.

“What do you want more? Do you want a person driving down the road that could have epileptic seizures? Or do you want somebody who’s using cannabis medicinally, and in very measured doses, in order to prevent his seizures?” Context matters in a courtroom, and the current systems in Oregon tend to lack the leeway needed to accommodate these situations, according to Pelley.

Cannabis DUIs are a hot-button issue within the legal and law enforcement community. It is a class B traffic violation if the driver or passenger consumes cannabis while inside the motor vehicle, according to Oregon Revised Statute (ORS) 811.482. There is a lot of discourse surrounding whether or not smell should be considered probable cause, especially considering possession of cannabis alone is no longer illegal in Oregon. Scent could just mean there is cannabis in the vehicle, which is legal as long as the person in possession is over 21 and the product is sealed in a closed container.

“Smell doesn’t always equal consumption. The scent of marijuana should be no different than the smell of coffee,” said Pelley.

Cultiva Law’s caseload is largely business-related, and as such, Girard had insights on how the fallout of the war on drugs impacted disadvantaged populations struggling to break into the industry. Directly after the commercial sale of cannabis was legalized in Oregon in 2014, the first people to start dispensaries tended to be small growers with large investors. These investment groups required startup money to be vetted, meaning the funds were examined for risk potential.

For people who were selling cannabis in the illicit market prior to legalization, this new requirement posed an issue in moving into the legal market.

“Ironic that they don’t want people that made a lot of money selling weed to be licensed, and make the state taxes,” said Girard. “I mean, this drug trade originally was built on an inclusiveness of all racial categories, and of all economic categories… And so when we look at the recreational market, it should be no different.”

This has contributed to an imbalance in the industry when it comes to the racial and socioeconomic background of cannabis business owners. “It’s insane, the economic divide that’s in the industry,” said Girard, “I think that divide is also what keeps the war on drugs going… what keeps it fueled.” The Oregon government has made an effort to remedy this through social equity programs.

In 2016, the Social Equity and Educational Development (SEED) program was introduced in Oregon. One of the initiatives in this program, the SEED grant, aims to provide more accessible licenses to people in “economically disparaged areas and discriminated groups” receive special consideration for a cannabis business license.

“I think that we’re gonna see a lot more opportunities that then may be granted to the industry as a whole once we see the positive effects they have,” said Girard.

One opinion seemed universal across the conversation: once cannabis is legalized federally, progress will come faster. And what we’re seeing is that the economic development that legalized commerce is providing is actually pushing the state legislature to catch up.

“We’re seeing the end to the war on drugs, not through presidential action or legislative action like we’ve been promised for so many decades by every politician. Now we’re seeing it because of the mechanisms of an industry that are forcing it to happen,” said Girard. “It’s phenomenal to watch.”

The staff at Cultiva Law are working hard to try and remedy a broken system, and an infantile industry. Whether it’s taking countless pro-bono cases, filling the pews of a courtroom, or fighting tooth-and-nail for their clients; they are making a difference that can be reflected in the tides of a developing industry and culture. “I don’t think anybody should be going to jail for a plant,” said Pelley with a wry chuckle. “I just don’t.”

But change is happening, one small win at a time. “Change has to come slowly. Otherwise it’s too chaotic,” said Girard. “Right?”