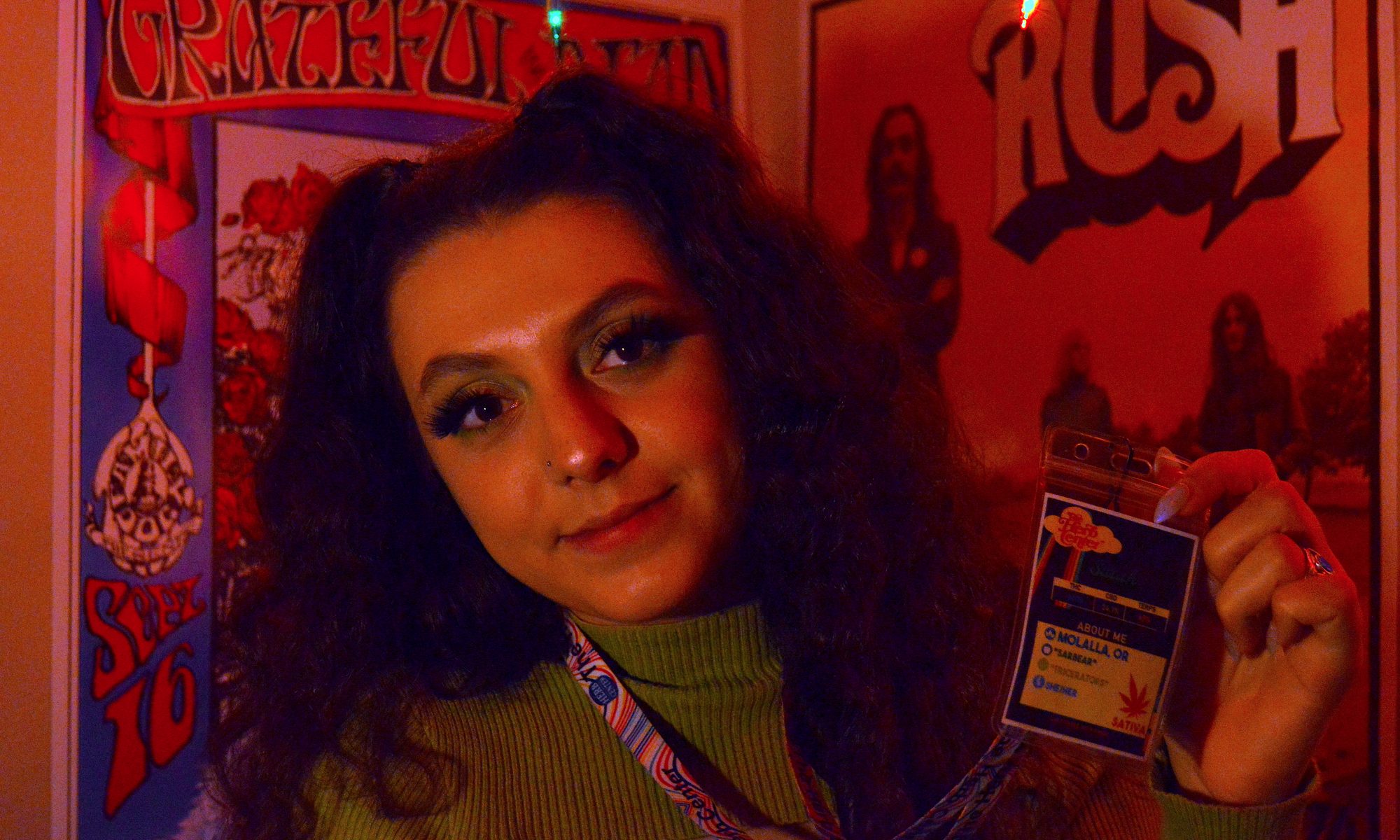 Written and photographed by Megan McEntee.

Sarah Salerno began working at The Herb Center in Oregon City when she was 21 years old. Now, at the age of 23, Salerno is pursuing her degree in biology at the University of Oregon – with hopes of continuing her career in the cannabis industry. With her knack for science, passion for the plant and fun-loving personality, she’s paving the way for stoners in STEM to smoke loud and proud.

Since you’re going to school in Eugene, are you still working at The Herb Center?

Yeah, so I’m a limited employee – basically like a seasonal employee – because I come home and stay during the holidays. Over the summer I’ll probably become more part-time, but I’m still an employee. They even sent me a Thanksgiving and Christmas gift, which is very sweet.

How have you enjoyed your time at The Herb Center?

My boyfriend actually trained me on my first day, and that’s how we met. But it’s honestly the best job I’ve ever worked in so many different ways. For one, how the employees interact with each other – you’re way more open with your peers and other co-workers. You have at least one thing in common: you both smoke weed. It allows for you to instantly become close with everyone that you work with, or at least easily acquainted with those people. Also helping people is really, really a wonderful feeling – it’s very fulfilling to work there.

What’s the most rewarding part about being a budtender?

Being able to help people. It’s definitely my favorite job I’ve ever had because you feel good about what you’re selling to people. We know that it’s going to help them, even if they’re using it recreationally. And medical patients who come in that have illnesses and suffer from cancer and things like that, just being able to help them and put a smile on their face is amazing. It makes you feel like ‘oh my gosh, my prior research and knowledge as a budtender has actually led me to find something that helps this person.’ Having a job where you get to do that all the time and get paid… It’s so nice.

What do you plan on doing after you graduate?

I initially want to start out by working in the cannabis testing labs that they have around Oregon – to help make sure that all cannabis being sold in dispensaries around Oregon is safe to use. It’s also a job in very high demand. Eventually, I can hopefully get into cannabis research, which can’t be done until the FDA approves it.

What kind of cannabis research interests you most?

I eventually want to work with all sorts of medical patients, and try to find cures – or at least something that alleviates different symptoms in a more specific way, instead of just numbing the pain. I feel like one of the reasons that we haven’t gotten that far yet is because we don’t prescribe cannabis like we do prescription drugs. Doctors are trained on how to prescribe prescription drugs. If we have that sort of training on how to prescribe cannabis, I feel like the positive effect that it has on people would increase tremendously. But it definitely could take a while before that happens. I want to be a pioneer with weed, in true Oregon City fashion.

Have you studied cannabis science in your classes at all?

Not anything specifically with cannabis. I’m not sure how many schools are allowed to actually do that if they’re federally funded. But basically taking any botany or biology class, where you’re studying the foundations of life or you’re learning about plants, you’re gonna be learning about cannabis by proxy. You know, you’re gonna be learning about how it grows, and how it reproduces, and it can be applied to almost everything that we do in the cannabis industry. But something I would love to take a class on is terpenes. They’re something that’s so versatile because they’re in everything. Anything that has flavor has terpenes, so I’m sure that somewhere there’s a class on terpenes, but I haven’t heard of one at UO unfortunately. Maybe one day!

What areas of cannabis research do you think need more attention?

As of right now, basically all cannabis research needs to be given more attention. But more specifically, I think there should be more research on how to prescribe the cannabis that we are already selling, and the cannabinoids that we already know about. There’s so many different cannabinoids; THC is a cannabinoid, CBD is a cannabinoid. Now we’re finding out about CBG and CBN and THC-A. There’s so many different factors that go into using cannabis medically, and there just needs to be a lot more research on that, including knowledge around dosages. People are basically having to be their own doctors when it comes to cannabis. Somebody might come in while trying to get off a prescription pain pill, and so they’re trying to find strains and dosages that will actually help with their pain. It’s really hard for us sometimes because we can’t always get the dosages right. So we’re telling them to start small, and it can be disappointing when people come back and say it didn’t do anything. It’s not a doctor’s office – even though their doctor may have told them to go to the dispensary. And that’s a huge problem.

How did budtending influence your decision to further pursue a career in the cannabis industry?

I think it definitely was the main reason why I always knew that I wanted to do something with weed. I knew that I loved science, so anything with both weed and science I wanted to do. As I grew up I was thinking, ‘wait, was that just my immature brain speaking? Do I just want to do something with weed because I like smoking weed?’ And it was totally true, but once I started working at a dispensary I just became excited about helping people. Then I started wanting to learn the science; all the terpenes and cannabinoids, and which terps help which ailments. It definitely made me realize, ‘oh my god, I can be a weed scientist and help people.’ Just selling this weed is helping people, so imagine what would happen if I started getting into research with it.