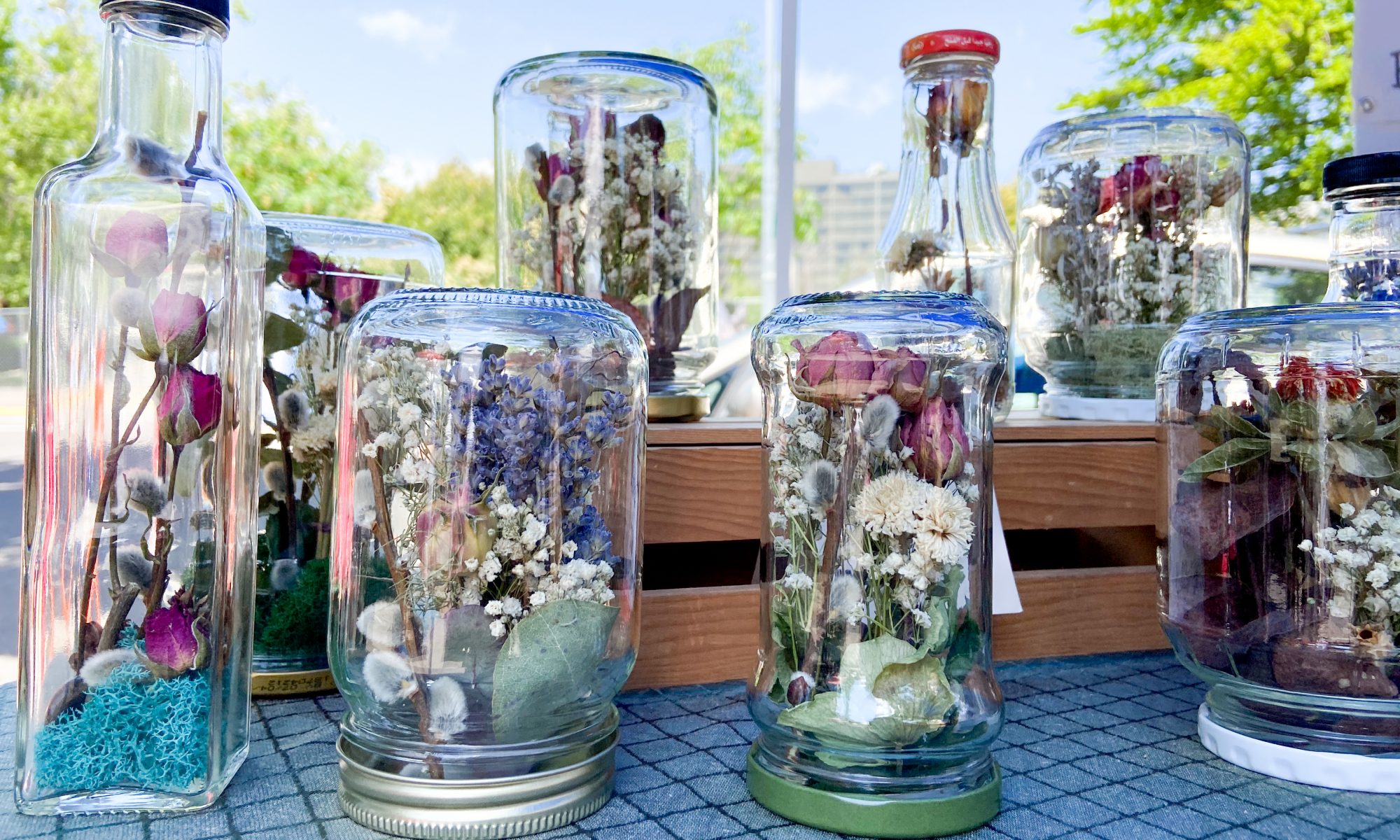 Written and photographed by Kimberly Harris

The Eugene Saturday Market features local artists who show off and sell their crafts every weekend. I was fortunate enough to talk to a few artists at the market and get to know a little bit about their work and experiences coming into their craft.

Blake has owned and operated her own sock monkey business for five years, although she started making sock monkeys about ten years ago after accepting a new job. When Blake’s mother got sick, and needed around the clock care, Blake started working the night shift. She was able to take care of her mother during the day and with the extra time she had working quiet nights, Blake started to make the toys  for her nephews. Blake was able to pick up sewing with the extra time, and it’s evolved into making 200 – 300 sock monkeys each year. She’s made thousands of sock monkeys over the years, and every monkey is made with the same sewing machine that her mother used to make clothes with. “It’s nice to see all the little kids playing with the toys and seeing them happy,” Blake says.

Desiree started making candles in 2017 while living in Malibu, California. She would mix sand and other elements from the beach into her candles. In 2018, Desiree relocated and started to sell her candles at the Eugene Holiday Market and has since sold her candles at the Saturday Market, the Tuesday Market, local stores, and events. When Desiree first started her business, she designed and wrote each label by hand. As her business has grown, she’s been able to find more efficient ways to produce her labels but is still the creative behind her business design. Desiree is always mixing new scents and seasonally changing her candles, she says the different scents that she has are endless. Her nature-inspired scents like almond, lavender, peach and even cannabis are extracted from natural sources. The “Exotic Hemp” candle is a cannabis-infused soy wax that has an earthy and spice scent topped with a cannabis leaf.

“Once I discovered air plants, it was all over,” McBride says, describing how she started making nature inspired home decor like terrariums and mini magnetic vases that hold plants. McBride has been making terrariums for three years but before, McBride was selling at the Saturday Market for 12 years with another business that blended sea salts, flavors and herbs. When the mortars would break, McBride started to incorporate succulents to help sell them, which has progressed into customized terrariums. Everything is hand crafted and the terrariums are from repurposed jars. She usually offers a build-your-own-terrarium station at her stand, but precautions for COVID-19 evolved the activity into terrarium kits that people can buy and build on their own. McBride creates a couple hundred terrariums a year but is constantly thinking of new projects like her hemp necklaces. “My problem is that I have so many ideas, but I can only make so much stuff, it’s always evolving,” said McBride.

Collections of old yearbooks, photographs and plants or critters in his studio are Pendlebury’s inspiration behind his paintings. The Miami native relocated to Eugene six years ago and started selling his work at the Saturday Market a year later. Pendlebury has been a professional painter for ten years but has been influenced by art and creatives his whole life like his father, brother and grandfather, who was also a painter. He sells his works on Etsy, Instagram, his website and in his studio located in Eugene. Pendlebury says he paints fast and small, creating about 30 new paintings each year. “If I don’t make new paintings each week, I don’t feel accomplished,” said Pendlebury.