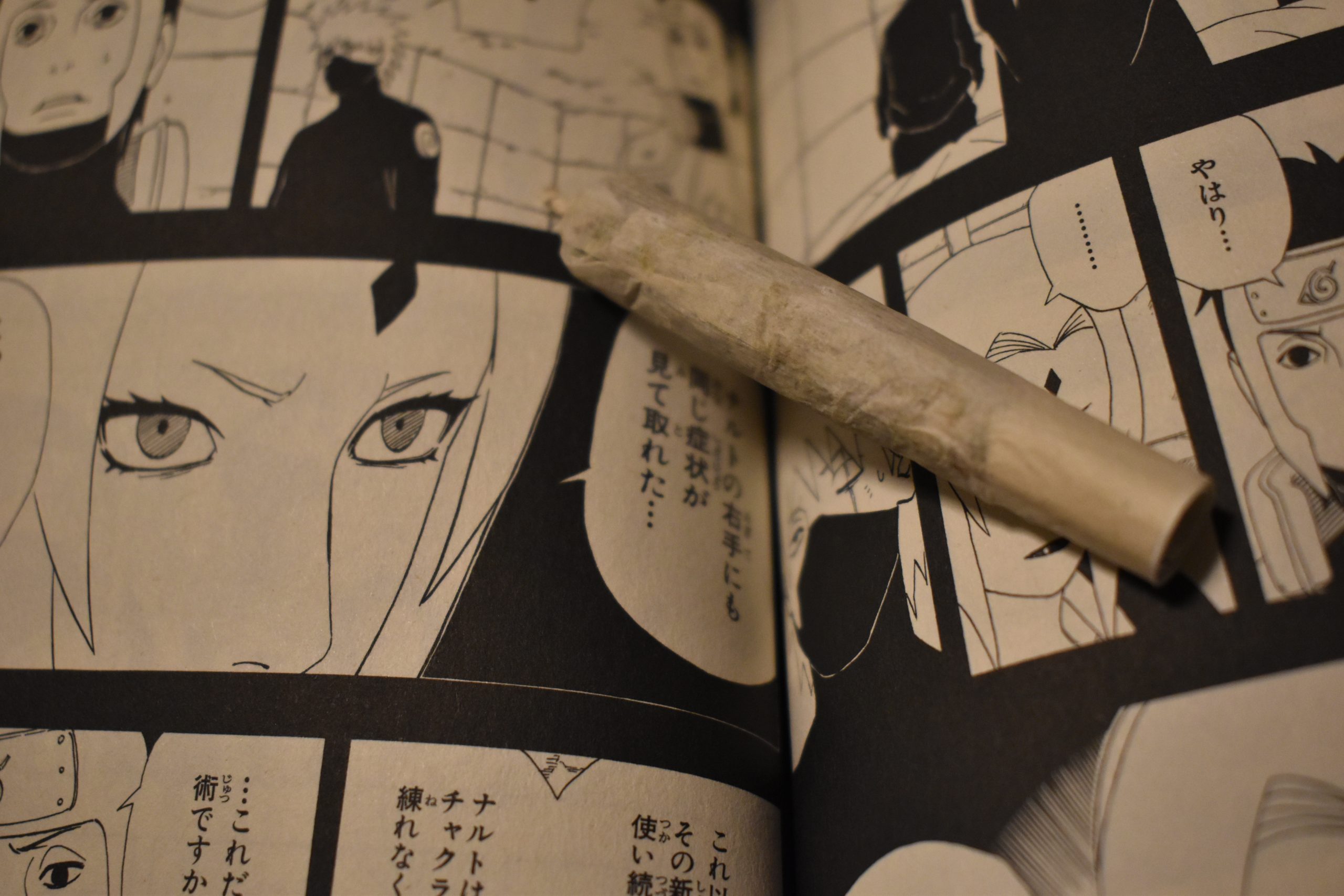 If you’re anything like me, you’ve noticed an astounding lack of cannabis in anime. Growing up in the United States, we’re constantly bombarded with jokes and references to using cannabis. We know bloodshot eyes are a dead giveaway and that you’d better have a dang delicious drink to cure the oncoming cottonmouth. Even when pot was illegal in all 50 states, there were iconic films themed around Mary Jane. Cheech and Chong: Up in Smoke has long been praised for starting the stoner entertainment genre in the United States. With anime comprising 60% of the world’s animation-based entertainment, I have to ask: where’s the weed?

But hey, let’s start with the fun part and recount the times cannabis has appeared in anime! Anyone who’s watched Samurai Champloo knows that hip-hop beats aren’t the only dank part of this action-packed series. In episode nine, “Beatbox Bandits,” Mugen is caught by the Tengu warrior-priests while on a mission to deliver a severed head, which inevitably leads to starting sacks of weed on fire in the storage shed to escape imprisonment. During the escape, Mugen inhales the purple haze emitted from the burning “holy grass,” causing a psychedelic fight scene. Although the warrior priests didn’t get to use their cannabis to start a revolution in the Japanese government, it did save Fuu and Jin from execution.

Besides that blatant representation of cannabis, anime has very obscure references and negative outlooks on the substance. In episode 20 of Assassination Classroom, Nagisa scolds Yuji, a minor character, for smoking cannabis. Detroit Metal City (highly nonsensical and full of jokes, not for the light-hearted) features the manager making the main character Souichi smoke cannabis in hopes of unleashing his true evil. If you’ve ever watched Eureka Seven, then you’re bound to have questions about Stoner, who is modeled after Che Guevara. And while Che Guevara never smoked the drug or promoted its use, we’ve all seen his image on smoking paraphernalia. Other honorable mentions would have to go to Brook from One Piece and Pannacotta Fugo from JoJo’s Bizarre Adventure, who both have “purple haze” incorporated in their respective arsenal.

So what’s the deal? For so much anime out there, the number of cannabis references is ludicrously low. Things become a lot more clear-cut after considering Japan’s strict laws against cannabis and the history behind them. Using or possessing Mary Jane can get someone up to five years in jail, and a fine, wholesale, transport, or cultivation can earn someone a 7 to 10-year sentence. Cannabis has been illegal since the Potsdam Declaration after the end of World War II in 1948. Yet, before WWII, the entire country of Japan used cannabis for all sorts of ceremonies and traditions. Shinto priests burned cannabis to exorcise demons, pilgrims left it as offerings on shrines, and families even burned it outside their homes during Obon, Japan’s festival of the dead, to invite ancestral spirits.

Japan is so staunchly against cannabis that they believe the substance is one of the most deadly drugs known to man. Ironically, Japan doesn’t classify cigarettes or alcohol as drugs, either. Drinking is so socially acceptable that no laws are prohibiting cracking open a cold one with the boys in public. Alcohol itself is sold 24/7 at convenience stores, supermarkets, and even in vending machines on the street. It’s also normal to show up to work hungover (so much so workers are not allowed to call out when hungover). Co-workers love to drink together after work, and refusing an invitation can be interpreted as an insult.

While drinking in public and smoking cigarettes are a-okay, cannabis will land you in a world of social shame and criminal charges. Neighbors and even doctors will narc on anyone they suspect of smoking reefer. Various celebrities have been caught enjoying cannabis, and it kills their career. Junnosuke Taguchi, a former male idol of KAT-TUN, was initially facing the death penalty for smoking a joint with his girlfriend. Fans even lament their idols’ poor choices and rally at their subsequent press releases to express support for “getting clean.”

But fear not! Shining through like a ray of sunshine is Michiko Kameishi, a determined lawyer who claims she’s “always thought that Japan’s Cannabis Control Law is absurd.” Kameishi is a skillful and intelligent lawyer who hates “unreasonable regulations that have no scientific basis.” After hearing how Los Angeles had trendy dispensaries and parties with frequent cannabis use, she knew the time had come to act. Japan may be steeped in propaganda surrounding cannabis, but Kameishi and the power of science may just change the country yet. And if attitudes about cannabis become more positive, we’re bound to see more references in anime.

One thought on “Where’s the Weed, Anime?”