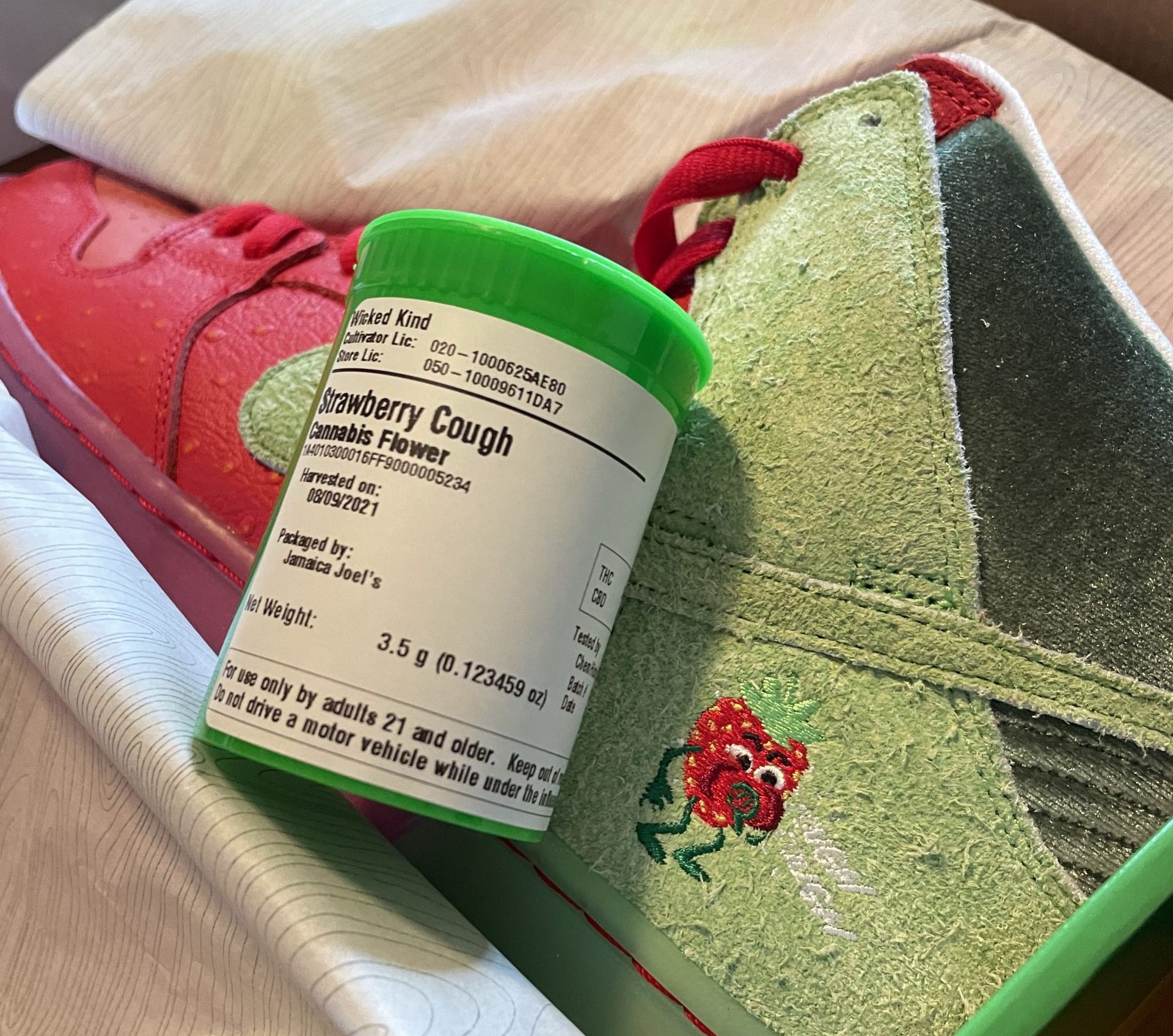 written and photographed by Alice Yeager

In 2010 artist Todd Bratrud released the legendary “Skunk Dunks.” A Nike SB adorned with purple and green suede to imitate the look of a fuzzy nugget of purple kush. The shoes came equipped with a stash pocket in the inner tongue and soon earned legend status by Nike heritage enthusiasts. Ten years later, Todd Bratrud created a sequel to the iconic Skunk Dunks: Strawberry Cough Nike Dunks SB. The delayed release created even more of a feeding frenzy by Nike collectors.

“The Strawberry Dunks was supposed to be a spiritual successor, and it was supposed to be released on 4/20 of 2020. But because of COVID they delayed it because the whole coughing strawberry motif seemed to be a little insensitive at the time,” said Skyler Rose, who has been collecting sneakers for the last 10 years. Skyler was lucky enough to get his hands on the new Strawberry Coughs that were finally released a year later, in October 2021.

The shoes are a colorful explosion of smooth red leather and fuzzy cannabis-green suede. Much like their grandfather Skunk Dunks, they also include a stash pocket inside the inner tongue. They also include some new details, such as a leaf shaped layer near the collar and a stitched in physical coughing strawberry on the heel. The shoes themselves are a statement, with multiple textures and muted and vibrant colored paired in sync.

“The strawberry dunks are just one of those legends of a shoe,” said Skyler. Just as Strawberry Cough is a legend of a strain.

The smell of fresh strawberries is truly the signature of the energetic potency of the strain. The colors of the shoe match the palette of the classic Sativa strain perfectly. The Strawberry Dunks are a super limited release with a lottery system used to win a chance to buy the pair.

“Since they were postponed, we didn’t know if they would actually be released. You know when they ended up getting canceled the few pairs that did end up making it out were going for thousands and thousands of dollars. So having that unicorn of a shoe was enticing, not because of the price point but because of how uncommon they are,” said Skyler. “Plus whenever they have such a good themed sneaker with history it’s just so appealing. It might be wild to wear a strawberry on your foot but I like taking things that are a little weird and making them work.”

Todd Bratrud and Nike hit it out of the park with these cannabis inspired kicks. We can only hope in another ten years we’ll see yet another revival of the classic Dunks (but it would be nice if we didn’t have to wait that long). If Nike is taking suggestions, Blue Dream, Purple Haze and Durban Poison would all perfect homages to cannabis heritage.