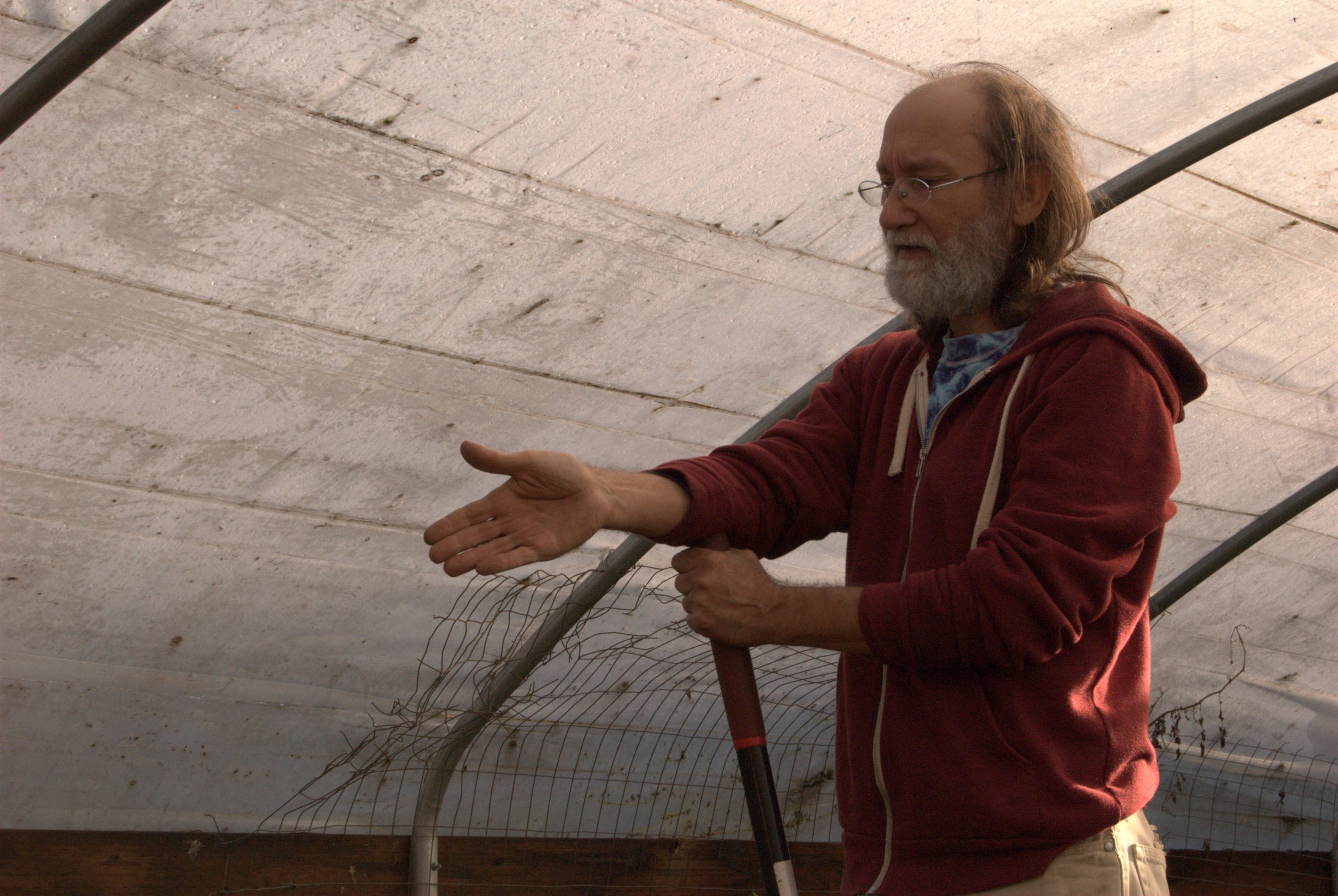 Written and photographed by Gino Savaria

The isolated backwoods of Douglas county enticed Chris Poulos as a reprieve from the excessive stimulation he was sensitive to. It seemed like a perfect first home for him and an ideal place to grow cannabis— until he spent four years immersed in a battle with Oregon’s judicial system.

Poulos shared that he has struggled with PTSD from a young age, and that he is on the autism spectrum. He said it wasn’t until he tried cannabis as an adolescent that he realized the chronic stress and dissociation he was used to was not the only way of being.

“When you’re 15, you don’t know what the hell’s going on, but I realized ‘wow, I suddenly feel better when I use this substance,’” Poulos said.

By his late 20s, he had grown a passion for cannabis, as well as about 70 developed plants. He said that many of his friends couldn’t grasp how he calmly produced a small farm in his house while Douglas county tended to deal harsh sentences for cannabis related crimes. To Poulos, the risks hardly registered.

That was until Feb. 16, 1996, when two police detectives drove past numerous cautionary road signs and up Poulos’s steep gravel driveway. In an appellate brief of the incident, the two officers reported receiving an anonymous tip that led them to the backwoods residency. Poulos said that to this day, he does not know exactly where they received their information from, but suspects the electric company’s meter reader.

Poulos said that as they spoke at the top of his drive, the lead detective identified a cannabis plant sitting in a second story window. Poulos believed this would have been far outside their vantage point.

“They came at 10 a.m. when the sun’s fairly high and the window is more of a mirror, and yet they somehow knew there was a plant behind it. Which was stupid to leave there of course on my part, but I don’t know if there was anything I could have done at that point,” said Poulos.

He said the officers seemed to show up loaded with the information they needed to make an arrest. Yet, according to official records from the court of appeals, they failed to secure a search warrant before arriving. Although the injustice was obvious, the point was moot.

“What was interesting to me was the lead detective had a macho attitude seeming to say, ‘I’m hot shit, and I can do whatever the fuck I want. I’ll throw your ass in jail. I don’t need a search warrant,’” said Poulos.

He recounted that the officers locked him in a Roseburg jail cell for four nights. On Feb. 21st, he was released 45 miles from his home without a vehicle or money to help him get home. When he returned to his property, it was as if he had been robbed. His truck, his house, his CD collection; the state had seized it all, claiming it must have been purchased with drug money, according to Poulos. Intending to push back against the infringement on his freedom,, Poulos quickly hired Robert McCrea, an attorney based out of Eugene.

“Back then, especially in Douglas County, they were sentencing people for 20 years. So my attorney wasn’t gung ho or like ‘we’re going to get you out of this.’ I guess he didn’t want to make any claims he didn’t know for sure,” said Poulos.

For eight months the case loomed over his head, leaving him to simmer on the diverging paths ahead of him. He said that when the day of the trial finally arrived, the prosecution approached McCrea with what Poulos believed to be a decent offer: the state agreed to keep him out of prison as long as he pleaded guilty.

“I think that’s usually their plan when they acquire evidence without a warrant, and most of the time people probably take the deal because they don’t want to go to jail. It’s kind of like a little scam,” said Poulos.

Poulos said their defense was based on sound logic and McCrea appeared relatively optimistic, so he decided to deny the plea deal. They instead argued that the arresting officers lacked a warrant, and signs warning trespassers should have made it clear that Poulos did not welcome uninvited guests to his property.

According to Poulos, the presiding judge, Joan Glawe Seitz, had commented that she was familiar with the area and would have been uncomfortable driving up to his house herself. He said the case wrapped up fairly quickly and Seitz declared him innocent of the charges against him. However, the prosecution immediately filed a notice of appeal, claiming the judge was biased and the case deserved a retrial. Poulos’s relief vanished as he remained suspended in the legal system’s web.

“They just made it as hard for me as possible. While they used tax money to pay the prosecutor, they knew I’d bleed from my own pocket. My attorney wasn’t gonna do the appeal for free,” Poulos said.

With the state still in possession of his truck, his only mode of transportation at the time, and his debts compounding, Poulos turned back to cannabis as a source of income. He said he didn’t see much of a choice, and feared losing his house if his bills were left unpaid.

A year after his first arrest while awaiting an appeal, Poulos came home to find a note left by county law enforcement requesting that he surrender himself. The detectives searched his home while he was out—but this time they had a warrant, he said.

Poulos called McCrea, who suggested he listen to their note. After spending one night in a jail cell, he was released with another trial ahead of him.

According to Poulos, they obtained the warrant for his second arrest by using information from the still open first case.

On July 23, 1997, three appellate judges considered the arguments made by the prosecuting and defending attorneys. The prosecution claimed that the no trespassing signs and various others  posted were insufficient to imply the detectives were unwelcome, and he should have erected a physical barrier instead. McCrea challenged these allegations, asserting that the measures Poulos took were sufficient enough.

The appellate judges affirmed the ruling of the first trial, stating that “there was no evidence that even the customary casual visitor would be welcome on [the] defendant’s property.”

Half the evidence the prosecution held against Poulos dissolved with this judgment, and freedom appeared within reach. Yet, the state still justified its warrant. They argued that his electric bill was far too high for a property without a permanent resident.

“This was my house. I lived there every day and they just flat out lied about it,” he said.

According to Poulos, the second trial revolved around this new notion. The state presented that the Registered Guard receptacle sitting beneath his mailbox was overstuffed with newspapers, and was apparent proof he did not actively live there. Combined with a statement from the electric company regarding significant power usage, they argued that the property was solely a cannabis farm.

“I wasn’t receiving any newspapers at the time, so I would just take the junk mail and stuff it in the Registered Guard receptacle, not really thinking much of it. I wanted to hold up that newspaper receptacle and say, judge does this fucking look like newspapers to you? Or does this look like trash?” said Poulos.

However, he did not need to; after a third trial he was once again declared not guilty. He said that this judge even appeared fairly irritated with the lead detective, who at this point Poulos felt was  harassing him.

As the prosecution ran out of steam, they made a hail mary effort for an appeal that once again ended in favor of Poulos.

Poulos narrowly avoided prison, but he did not get off scot free. He soon found the Department of Revenue billing him for $18,000. This was money he did not have, and as interest rates approached 10%, he felt cornered. Poulos said that he didn’t really know what he was supposed to do, so he just kept filling out forms the Department of Revenue sent him, hoping it would stall the process a bit—and once again found his way back to growing cannabis

After numerous documents sent back and forth, he was slightly surprised to see that he had another court date. This time, he would be the prosecutor. He found a tax lawyer in Eugene and pushed for the absolvement of the debt.

He was disappointed to learn that while they could not throw him in jail, the department of revenue had no issue fining him. In the end he was able to take the fee down to $8,000.

“There’s a lot of things that get fucked up when the state comes in and interferes with your life. So you know, it kind of forced me to address my anger and where my life was because ultimately it’s up to me,” said Poulos

Nearly 15 years after his first arrest, a bout of depression pushed him to turn off his grow lights and leave his cannabis plants in the past. Yet, nurturing plants continues to be a daily ritual that helps him find peace. Poulos said that he sustains an ample garden and greenhouse of vegetables, but he does not grow cannabis anymore.

As he sorted through potatoes crowded by eager shoots he reflected. “I am so thankful that, now, I can just walk two blocks to a store and buy standardized edibles without any danger of getting arrested.”