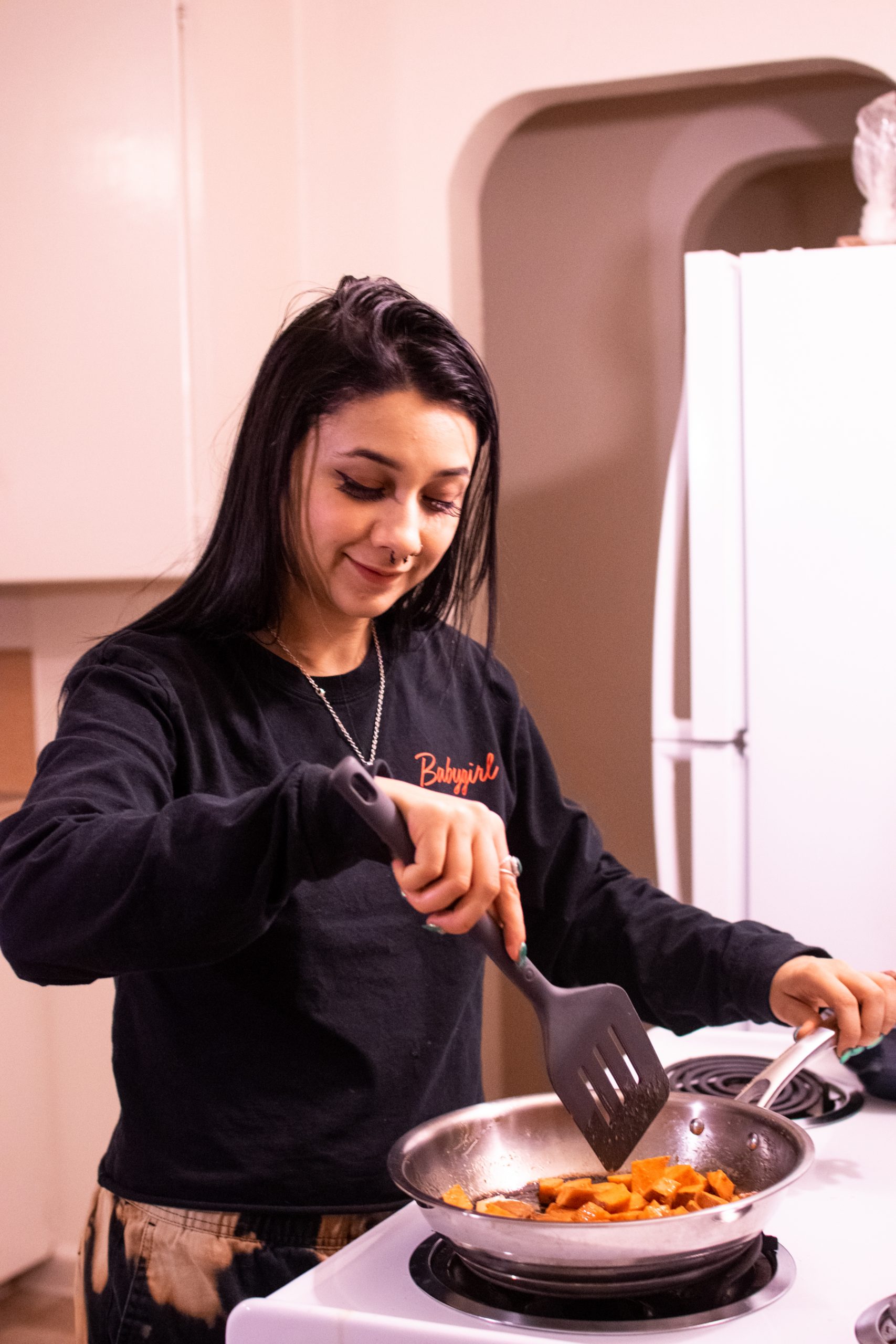 written and photographed by Kimberly Harris

Warning: This article is for the personal use of adults 21 years of age or older in a cannabis-legal state. Edibles must be made for personal use, at home and consumed by a knowing and consenting adult. Any other use of edibles like distributing for profit or unknowingly dosing a person is illegal. Let’s keep this fun and legal, know your limits and laws before making or consuming edibles.

Edibles are delectable—and dangerous. Without the right understanding, one’s indulgence can turn into an intense high. But if you’re anything like Ashleigh Horner, sometimes you’re searching for exactly that. Horner has been making homemade edibles since 2015. She was a budtender for three years in Eugene and Portland. Now, Ashleigh works at Claywolf, an oil processing company, as a packager.

Her first pan of edible lemon bars led her to start making meals like cannabis infused pancakes and steaks. “I like to cook. Sometimes when I smoke too much my lungs hurt, so it’s nice to eat and get high rather than to smoke more,” says Horner. “I don’t mind the taste of weed because I smoke so much that I’ve adapted to like the flavor of it.”

Horner uses Rick Simpson Oil (RSO) to infuse sweet potatoes for her latest edible meal. RSO is a fully activated oil, which means users don’t have to worry about the science behind activating it, like decarboxylating flower in the oven.

*Recipe can serve a single person, but the amount of RSO depends on your preference of a high. “It’s hard to tell how edibles hit people because it’s different for everyone. Just go slow and start with a small serving,” said Horner.

2)    Heat the butter up just enough to be combined with the serving size of RSO.

3)    Mix until the RSO is mixed all the way through the butter. As the mixture is stirred together the butter will start to turn an unattractive, dark yellow color.

4)    Set the butter and RSO mixture aside. In a separate bowl, mix together the potatoes and spices to taste. Stir the ingredients together to season the potatoes.

5)   Cut the lime in half. Squirt the lime halves into the bowl of seasoned potatoes, then mix. Roll the lime on the counter before cutting to get the juices flowing properly.

6)    Place a cooking pan on the stove top, turn it up to medium heat and empty the bowl of seasoned potatoes into the pan.

7)    Pour the butter and RSO mixture into the pan. Turn the stove top down to a medium-low heat. Keep it on a lower heat so the butter mixture doesn’t burn– the medicated oil can burn out with it!

8)    Cover the pan and let it sit until the potatoes are soft, approx. 20 to 30 minutes. Check on the potatoes while they are cooking by poking them with a fork to see how soft they are.

“When I cook, I add seasonings here and there that I see fit. Cooking is supposed to be fun and yummy,” says Ashleigh.

9)    After the potatoes are soft, put cilantro in at the end to avoid letting the greens turn too brown.

10) When the potatoes are cool enough, eat and enjoy your creation with caution.

According to Ashleigh, RSO infused foods can taste like cannabis, but with enough spices and lime, the sweet potatoes totally mask the flavor. Other friends tried Ashleigh’s potatoes and thought they tasted nothing like cannabis, which is a signal to users to be cautious when consuming homemade edibles.

Ashleigh recommends using a fatty substance like butter, cooking oil or coconut oil to mix with activated cannabis oil because the THC bonds to fat and that’s what gets you high. A mistake she’s made in the past is not blending the THC well enough, so edibles can be unevenly medicated. Avoid disproportionation by mixing cannabis oils and fatty substances well and pouring the mixture evenly into your cooking.