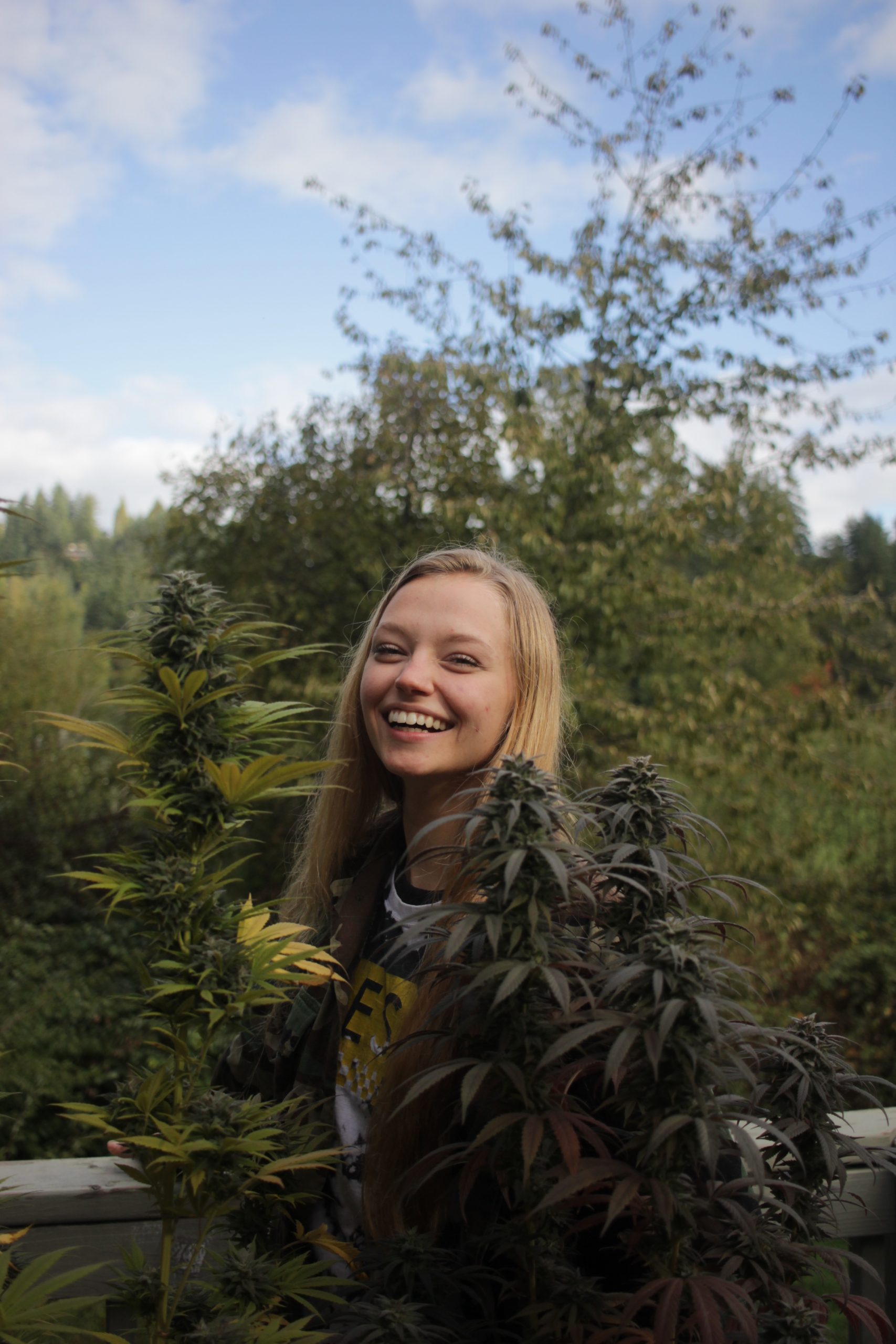 Written and photographed by Kaylynn Wohl

In our last harvest issue, I provided an overview of my first successful Oregon grow with Jack Herer as my chosen child. This season, I doubled up on plant bodies to care for. It was Mother’s Day weekend, the prime time to plant outdoors, when my Jedi Master grower friend Alan helped me adopt two sisters of the same strain: Purple Punch.

The visual cues between the twins made it difficult to know who’s who, so I named them Agatha and Beatrice. Figuring only one symbol of identification would suffice, Agatha was given a raw blue agate stone placed at the edge of the root pouch.

Early on, I ran an Instagram story poll asking “which team are you?” and Agatha won popularity. A few weeks later, I started noticing that one had more success in the race towards the sun.

I began wondering about the metaphysical implications of having a crystal in one but not the other. Or maybe I was focusing more one the one with the marker.

I recalled a video of Dr. Masaru Emoto’s rice experiment showing the power of positive words and how they affect the growth of grains of rice resting in water. The idea is that the rice that was praised started to sprout and grow while the ones that were ignored or criticized rotted and decomposed. I assumed maybe having more attention on one plant was causing the other one to struggle. I began to give more intentional words of gratitude to hyping Beatrice up, and I placed a ring of rose quartz at the base of her soil to continue our season. While some progress was made, I was truly questioning the sisterhood of these girls.

For flourishing foliage, bat guano was my main nutrient, keeping it organic despite the fact that I’ll have these buds wrapped in a Swisher Sweet in no time (yes, we all have our flaws). Progress was noticeable up until I spotted a pause. I returned to my Jedi Master with two questions, those of which he answered with: check the water pH and, “Oh! You don’t have Purple Punch. I gave you Purple Passion and OG Blue Cheese.” We all have forgetful stoner minds, so this was no big deal. I later learned he was also growing Purple Passion. I was just relieved to find out I was in fact hearing them hum a different tune.

You’d be surprised how much travel was necessary to obtain a pH meter and buffer solution in this town. Many of us Eugenerds have had the delightful Eugene experience of having one specific item needed to obtain but it takes a minimum of four destinations to finally complete the quest… or we simply give up to resort to giving the internet gremlins our money. Shout out to the Constant Gardener for most of my treasure hunt finds, including their own pH up (called Olympus Up) and pH down (cleverly called Hades Down) solutions. This Nectar of the Gods line comes in black bottles with intricate labels; they’re pretty metal so of course I’ll be throwing dollars at their product.

I tested my good ol’ tasty tap water and was shocked when I saw a loud 8.3 appear on the meter. An ideal range for cannabis (depending on their stage) is 5.5-6.5. Cannabis plants cannot absorb and process any more nutrients unless being within this sweet spot. I put my scientist pants on (and gloves of course) and began the process of making a stockpile of bat-shit-tea. Keeping in mind that nutrients added to water will alter the pH, I was sure to add the solutions after the guano.

As the colder nights rolled in and I rolled up, my girls began showing more distinct differences. Beatrice, identified as Purple Passion, darkened her leaves with hinted hues of maroon and plum. Although her size was significantly smaller than her neighboring OG Blue Cheese, I was pleasantly surprised with how beautiful her buds were in comparison. The rocky upbringing was so worth it when I arrived at the flowering stage. I’ve never seen such a beautifully deep purple before. My OG Blue Cheese, as smelly and thick as she was, stood taller than me at around five and a half feet. Vibrant green leaves fanned throughout the frosty colas.

My Jedi Master told me, “They say if you think you’re ready to harvest, you should wait another week.” So I waited and saw more progress. Another week came by, and I waited some more. By mid October, I gathered some leaf clippings from around the buds and we inspected them under a scientific microscope, although jewelers scope works fine for those with sturdy hands.

For a nice body high and some couch lock, I was looking for 15-24% of the trichomes to appear in amber rather than milk splotches. Anything from 40-50% and they start to break down and deteriorate.

On October 16th, I pulled Agatha and Beatrice’s fan leaves off and moved them inside to live in dark solitude for two days. Upon entry, my house smells like dank farts. My guests don’t mind, and my roommates patiently wait by my side as I prepare to cure. This may have been my most stressful growing experience as I was challenged with far more intricacies due to the finicky nature of these two strains. I walked right up to my edge and leveled up in growing experience. I can’t wait to set these flowers to flame.