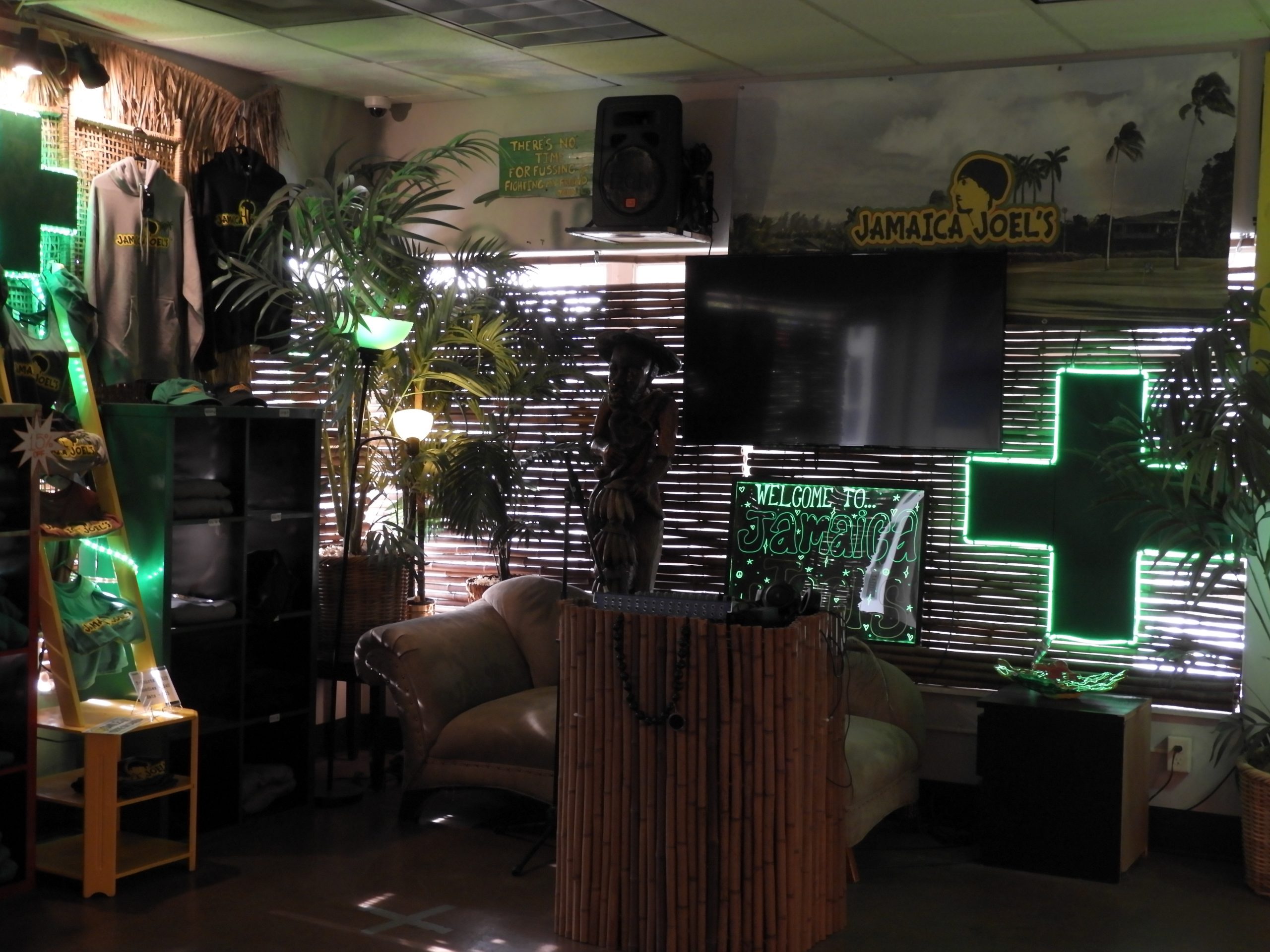 written and photographed by Annie McVay, with additional photos provided from the Oregon Historical Society and Lane County History Museum

Have you ever wondered about the history behind the building a dispensary occupies? Featured below are two local dispensaries with rich background stories you may not have heard before. If any readers out there know of any others, please share them with us @greeneugenemag!

The building Jamaica Joel’s occupies has a genuinely unique Art Moderne and International Style architecture, popular in the post-war era. The use of aluminum railings, curves, and reinforced concrete may remind you of similar building characteristics from the Fallout video game series. According to the University of Washington’s Pacific Coast Architecture Database, the building design was the first independent commission done by Harry Robert Wilmsen, a local Eugene Architect. Earnest W. Ellis started his photography business in 1920 and requested the commission from Wilmsen. Ellis moved his studio there once construction was finished in 1947.

Locally owned and operated, Jamaica Joel’s truly is a dispensary for the people. Before COVID-19 put a halt on public events, the dispensary even hosted “Joel’s Jams” and featured independent hip-hop artists such as Zion I. Using the dispensary as a venue to spread creativity, art and ideas for the people is something we all hope to see again in the future! Remember to support your local dispensary so they make it through these tough times.

The Sorority House was built in 1902 for the historically well-known banker, attorney, and State Legislator Windsor W. Calkins. Given the distinctive Queen Anne Style architecture and prime location, the Calkins house is surely as hard to miss these days as it was back then. The fanciful conical-roofed corner tower, wrap-around open-air covered porch, stained glass window panes, and the plethora of ornate interior woodwork are all staples of the Victorian Era architectural style. The Queen Anne Style was popular from 1880 to the early 1900s. Windsor, following family tradition, modeled the design off his childhood home in northern Minnesota. The Calkins family never could have guessed what a delightful dispensary their home would become!

Way before Green Eugene took an interest in this dispensary’s rich history, another student from the University of Oregon had acknowledged the home’s unique value. Kimberly Goddard, at the time a graduate student at the School of Architecture and Allied Arts, prepared the form to have the Calkins house registered nationally. Previously, Eugene citizens voted on keeping the house in the community using  taxpayer money, but the measure failed. Then in 1976, the home was titled a City of Eugene Historical Landmark. Thanks to Goddard, on December 9th, 1981, it was published in the National Register of Historic Places. The Calkins house is one of the last of the elegant homes from this historical period, even outliving the famed Patterson house featured in Animal House.

While the official documents state the Calkins house site was acquired through part of Hillyard Shaw’s first donation of land to Eugene in the 1860s, it is essential to acknowledge this land first belonged to various Indigenous Peoples. Earlier agreements in the 1850s made by the Congress-appointed Willamette Valley Treaty Commission did not end with any Indigenous Peoples agreeing to leave the valley. Unfortunately, these agreements were not ratified because they did not make the tribes relocate East of the Cascades. By January 1855, after constant encroachment, harassment, and diseases brought by American settlers, the Indigenous Peoples signed the Kalapuya Treaty (also known as the Willamette Valley treaty). The Kalapuya, the Clackamas Chinook, and the Molala peoples were removed by force from the Willamette Valley during the following winter.

In 1886, the property passed from Robert Scott to Mary Scott, who then sold the land to Windsor Calkins on April 17th, 1902. The house continued to stay in the family after Calkins died in 1945, leaving the property to his daughter, Jeannette. In 1975, Thomas and Nelly Link and Anne Kimball bought the house, saving it from otherwise slated demolition. The new owners began many restoration efforts, such as fixing the foundation, porch, siding, roof and replacing support beams plagued with dry rot. The original hardware found in the house was also reused, and missing pieces were replaced with vintage hardware from the period. They later opened the Calkins house as a bed and breakfast, which required few alterations to the building’s authenticity.

Cannabliss & Co acquired the property in 2016 and dubbed this new location ‘The Sorority House.’ Besides the sign in the spacious and sprawling front yard, many would think it was just that, especially given its prime location near the University of Oregon campus. Cannabliss & Co did an exceptional job in this first year of business, impressing so many customers that The Sorority House took first place for best dispensary in Emerald Media Group’s 2017 Best of Campus. The Emerald Essentials article featuring this accomplishment by Delaney Rea noted how knowledgeable the budtenders were and the wide selection of products – both of which are still true today!