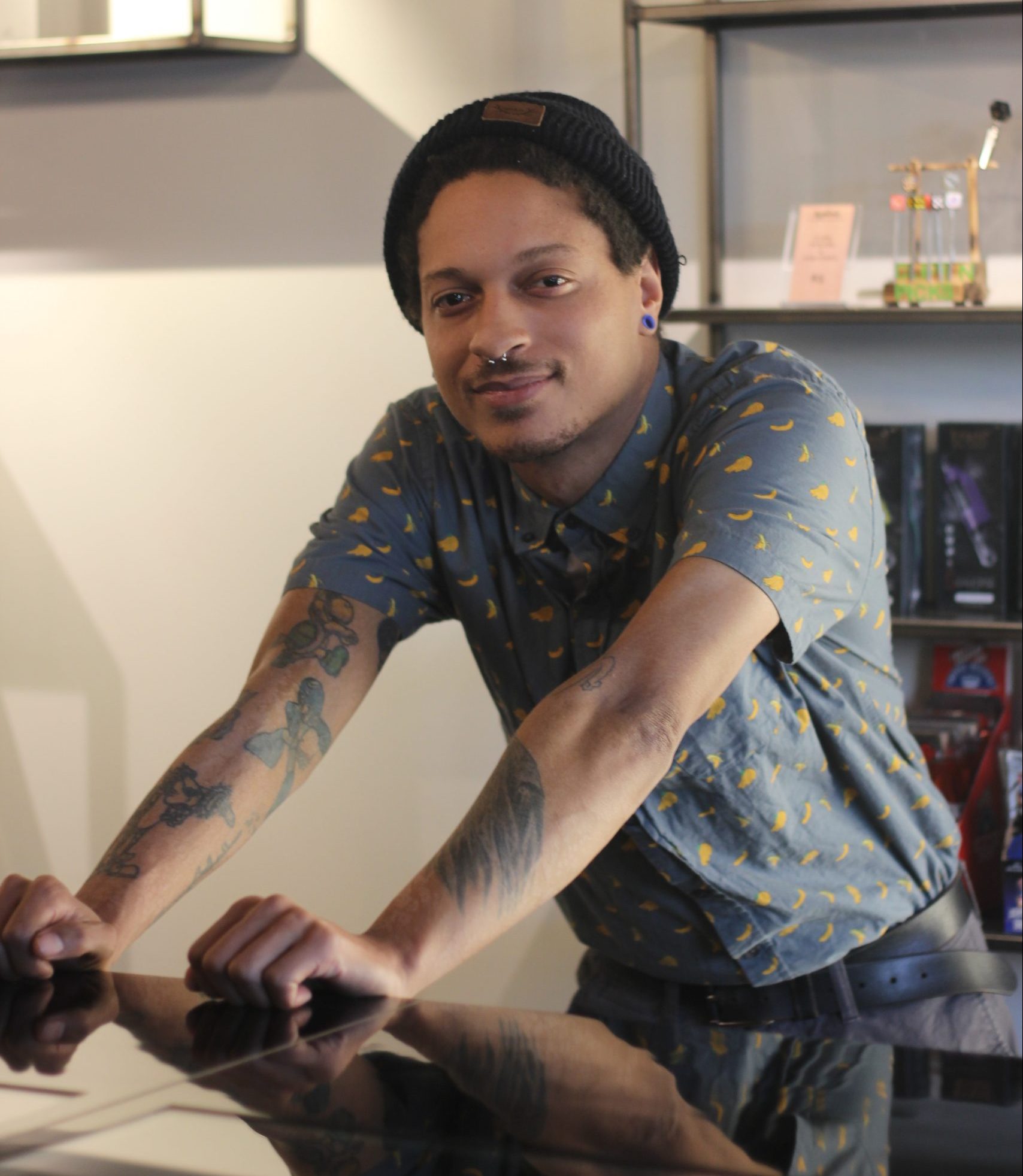 Written and photographed by Kaylynn Wohl.

How long have you been in the cannabis industry? What interested you about Hashstoria?

I’ve been in the industry for three years, and I’ve been budtending all three. One year I was supervising a dispensary.

I’ve been working at Hashstoria for a few months, and I chose this location because of the people who work here. They seemed like a very nice bunch of people, and it was just a good fit. I could be myself and do things how I want to. It gave me an opportunity to grow. It’s definitely a cherry on top being Black owned. Hashstoria is owned by Raekwon, the Chef of Wu-tang Clan, which I didn’t know until the interview process.

How has working in the industry changed your relationship with cannabis?

Purple Hindu Kush is my all time favorite. It’s just so hard to find now, it’s so mixed down with everything being hybrid. In this day and age, I would say Wedding Cake. It’s also really heavy, but not as sweet.

What product would you recommend to readers?

Our hash rosin. We have probably the biggest collection that I’ve seen in a dispensary. Otherwise, our exclusive Raekwon’s Ice Cream Dream. I think we’re one of two dispensaries that has it in the state.

What would you change about the cannabis industry if you could?

The biggest thing is the standard of knowledge and training when it comes to budtenders; our community trusts us to give them what they need efficiently and effectively. I also feel like there should be a lot more engagement with the community. I would also like to see more testing done, especially on flower. THC and CBD are great, but there’s a lot more going on that isn’t talked about that attributes to how we feel, like with cannabinoids and terpenes.

Are there any conversations that aren’t being had in the cannabis industry?

I haven’t heard anyone talking about a union. Not one person has brought up the fact that we as budtenders and people in this industry should unionize and demand a specific rate of pay and benefits. We’re all out here working trying to provide for ourselves. We need to be taken care of as well, just like we take care of the companies who are making millions of dollars a day. Unions protect you, and it’s beneficial to the company whether they see it or not. It creates happiness.

If you could meet the other owner, Raekwon the Chef of Wu-tang Clan, what would you say?

I always wonder what famous people want to be called. Just as a person, would they rather be called their stage name or birth name? I would at least try to figure out his real name and treat him like a person, see if he wants to smoke because it’s a great way to build a bond.

What do you know about training for budtenders?

I know there are places that do classes for training, but I don’t think they’re being pushed across the board. For instance, my first cannabis job paid us to do a CBD certification class that was run through East Fork Cultivars. They came in and did a workshop about  CBD, its effects, the ways you consume it and the ways it could benefit you when eating versus smoking it. It was essentially a couple hours of a class with a few presentations, we asked some questions, there was a mock test at the end, and we got a certification and a badge.

Would you have wanted more in depth training when you joined the cannabis industry?

Most definitely. For instance where I’m originally from in Oakland, there’s a cannabis university called Oaksterdam, and it was one of the first in the country. There are places with an in depth curriculum that you can take, but it’s  not something that’s required. If you want a job at budtending, all you do is take a 30-minute test online. They just want to know that you know the laws. Personally, growing up, I was around a lot of drugs and people who used drugs. I had questions like what happens when you take them, why do they make you act that way, and what are the short and long term effects? Luckily I grew up around the time with the internet, so I would sit and read about brain chemistry and receptors and how drugs affect them.